September 26, 2010
I love poetry, don't you?  Everyone needs a little rhyme sometime, as the old,old saying from long ago, which I just made up, goes. 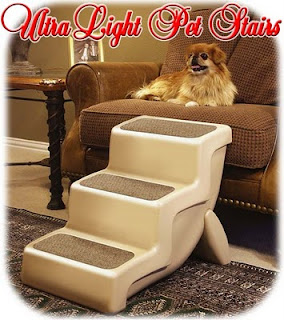 The pooch gets its own sofa staircase?  You are kidding me.


No wonder the dog has a look on his face that says, 'Yeah, yeah, so I have a couple of morons as owners, but who's complaining?  You should see the travellator they've installed between my dog bed and my food bowl.' 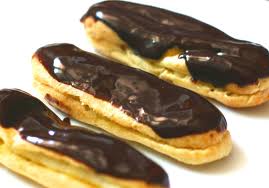 Ah, that's better. You want that picture again, so you can look and drool?

Yes, okay, but this is the LAST TIME!

Can I get on with the story now?

So, there was Goldilocks, skipping through the wood, like all fairy tale heroines about to meet a sticky end do instead of walking normally, when she saw a little cottage in the distance.  Then she realised it wasn't in the distance at all - it was right there - but that was to do with having her mother's glasses on instead of her own.  Dur!  She reached into her pocket for her own glasses, put them on, and the story continued.

She peered in the window of the cottage (something she couldn't have done in the previous paragraph).  There were some bears sitting there in their kitchen, apparently about to eat porridge.  How boring is that? she thought.  Everyone knows that porridge is only for OLD PEOPLE and SCOTS.  She was a little disappointed to find she was in a story with porridge in it, instead of a leering wolf.  Red Riding Hood had ALL the fun.

But Goldilocks had nothing else to do, so she stepped around the door of the cottage, which was conveniently open and saved the bother of an extra plot device, and went in.

The bears were in the middle of a massive family row, and all wishing they had opted for toast.  They had, in fact, been advised by their family counsellor never to do the porridge thing again, because it did keep leading to incidents of violence and the police having to be called and they were a great drain on the public services, but they weren't doing very well on the anger management thing.

The row was so fierce that the three bears did not even notice that a girl with yellow hair and glasses was standing in their kitchen, looking at a plate which was sitting on the kitchen surface.  On the plate were three chocolate eclairs.  And the one thing Goldilocks loved MOST in the world, apart from the sessions with the hairdresser when she had her hair done with peroxide to hide the fact that her hair was in fact a very unexciting shade of brown, was a chocolate eclair.  (Her mother kept saying to her, 'So I was drunk the day we named you?  I've apologised, right?  Now get over it!  And sit still so the dye can work.')

Goldilocks tiptoed behind the three bears who, despite the row being pretty dramatic and perhaps a chance to show off some written dialogue skills, were very quickly becoming a wholly superfluous item in the story.  She snatched the plate and ran out of the house.

But, oh!  Oh, yes, oh!  What Goldilocks did not realise .... and what I had not even realised until this very sentence, was that the eclairs were POISONED!

You see, Baby Bear had got so fed up with his rowing parents that, the day before, he had bought some eclairs on the way home from school, knowing that they were his parents' favourite the-porridge-was-an-epic-fail-again alternative breakfast.  He had carefully opened them up and laced the cream with some cyanide, hoping that eating them would be the end of his parents and the beginning of a new life for him with a girl bear from school who was anybody's for a pencil sharpener.  (Where'd he get the cyanide? Don't be so DEMANDING.)

But Baby Bear was going to have to put up with his parents, and with the porridge rows, and with the conflicts over broken chairs and people sleeping in their beds which haven't actually surfaced in this story at all.  Because Goldilocks was sitting under a tree, stuffing in one eclair after another as though eclair-stuffing was an Olympic sport, and about to meet a very nasty end.

Which she did.  But I can't do death scenes.

It wasn't all bad, because, hearing strange choking noises and someone saying, 'Help me, help me, I'm dying too young, and well before my story is finished', the bears all rushed out of the house, forgetting their row completely.  They found Goldilocks all twisted and ugly, no longer in need of glasses or, something which would save her mother a packet, those sessions with the hairdresser.  This put their problems into perspective somewhat.

For years afterwards, the bears wondered where the plate of eclairs had gone which had been on the kitchen surface, but they never connected the two events.  This was strange, because, surely Goldilocks had not eaten the plate as well as the eclairs?  Surely that's a really big mistake in this story, and totally undermines the ending?

Well, I forgot to say that she had a secret plate-eating habit.  Okay?  Okay? Any more questions?  Don't HASSLE me!
Me adapting famous stories