September 21, 2010
So, you're pregnant, and having a baby shower, eh?  And what are you going to be left with when everyone's brought their presents and drunk your wine and eaten your chocolate cake and gone home?  Eh?  Eh?  Here's what - and then I'll tell you what you SHOULD be asking people to bring.

1. You'll get romper suits for babies aged 1-3 months, despite the fact that your bump is so big that it gets to destinations fifteen minutes before you do and contains a gargantuan infant whom you'll have to put straight into your old school uniform until you can get to the shops.

(Another word of caution on romper suits:  They will also mostly be that shade of could-be-a-girl-could-be-a-boy yellow that suits no one, causes your baby's complexion to look jaundiced, and makes everyone who looks through your photo album say, 'You know, I think I prefer all the black and white ones.')

2. You'll get plastic dishes with mega-sticky feet which are all very useful while the child is eating, but when levered off the highchair tray, project spaghetti bolognese towards the ceiling so that you have to repaint the whole room in stippled orange to match and pretend it's called style.

3. At least three people will give you a white padded book with gold lettering and a picture of some baby shoes on the front, and spaces in which to write the dates of a) baby's first step, b) baby's first word and c) baby's first spoonful of pureed carrot, which is all very well, but by the time baby's doing any of these things, you won't have time to write it in, because you'll be dealing with a) baby's first diarrhoea incident on the bus, b) baby's first projectile vomit straight into the face of your boss and c) baby's first experiment with a new game called 'Take My Nappy Off Myself and Spread the Contents Over the Kitchen Rug'.


So, my advice is to ask everyone to bring, not the usual presents, but as many cardboard boxes as possible.  Because cardboard boxes are really all you need to care for the modern baby.  Here's why. 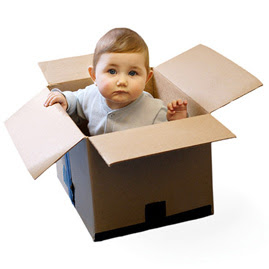 1. They're cheaper than cots for sleeping in, and they're warm. The homeless found this out years ago but no one's been taking any notice.  There are no bars to look through, so you get rid of that horrid 'my baby is in jail' effect.  And if you're a new mum, and in danger of forgetting that you HAVE a baby, you can write 'This Contains My Baby' on the side with a marker pen without worrying about spoiling a nice piece of furniture.

2. You can sit a baby in a box with high sides with a few rattles and a teddy and it doesn't know it's being mistreated. It may even fall asleep if you're lucky.  (See Point 1.)  If you're worried it will be lonely, you can always put eye holes in the side which is facing you, and then when you stop being worried it will be lonely (or you've reached a really interesting chapter in your book), just turn the eye hole side to face the wall.

3. Babies playing with cardboard boxes don't make as much irritating noise as babies playing with saucepans, toy drums and toys that play the same pig-awful piece of Chopin again and again and again.  Cardboard even muffles their cries if the sides of the box are high enough and this is made even more effective by putting the boxes and the baby in a room a long way away from you.  Baby will really enjoy the ride in the box as you carry him upstairs and along the three corridors and up the spiral staircase to the attic, too.

4. If the baby is really stressing you out, you can play a great pretend game called, 'I'm sending you away' in which you put the baby in the box, wrap it up loosely with string and a luggage label, and the baby will still be able to breathe until you decide to unpack him.  You will feel much better after doing this.  Warning: If you find yourself at the Post Office, with the box, and standing waiting for it to be weighed, you are probably a little more than just stressed.

5. When the baby has grown up a bit, you can sneer at all those fluorescent orange and green plastic kitchens for sale in the toy shops.  Just line up five large cardboard boxes in a row in the baby's room.  On one, draw four hobs.  Cooker.  On the next, draw a circle at the front.  Washing machine.  On the third, draw a handle.  Fridge.  On the fourth, draw a slightly different handle (for variety).  Freezer.  On the fifth, draw a picture of yourself, so that Baby can pretend there is someone else in the kitchen with him while you are just finishing off watching a rerun of Friends.  This is only fair.
Advice from Me Me pretending to be a Mommy-blogger