October 18, 2010
I saw a baby dressed in designer jeans and posh trainers today.  It was about an hour old.  In fact, I swear I could see the umbilical cord poking out from under its Stella McCartney shirt, still purple and throbbing.

Either I'm well out of date on the way foetuses develop in the womb these days (like, fully dressed for partying, Jimmy Choo shoes included, and definitely about to make its mummy need a metre-long episiotomy) or that baby was put into grown-up clothes and taught to say 'Mwah, mwah, dahling you look MARvellous' and sip Chardonnay and eat canapes with one hand before it had its first breastfeed or chance to fill a nappy with a tarry substance sufficient to surface the M25.

Here is a picture of what my babies used to wear when I was a mummy/mommy way back. After all, covering a baby up is really just about keeping them warm, for heaven's sake.  No need for FUSS. 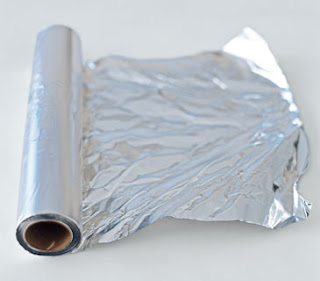 We had things in perspective in the 1980s.  And, without so much kitchen technology as you all have now, we didn't have so much time to spare.  So, while we were wrapping the chicken for the oven, we multitasked and wrapped the baby, too.  Job done.

We just had to be very careful about which one went in to roast.  Finding a raw chicken in the pram, just when one's boobies were as leaky as a disgruntled civil servant, would have been most inconvenient.

Okay, I exaggerate, I admit it.  But the truth isn't much better.  This is what my babies really wore.


Yeah, yeah, you preferred the foil.  I see your point.

A friend of mine still mocks me for the fact that my babies lived in sleepsuits, or, as they were called, Babygros, until they were about three when I reluctantly bought something radically different, say, a cream one rather than white, or one with buttons instead of poppers.

Anyway, let me tell you, 'Babygro' is a misnomer, because I had my babies in them day and night for years, and they didn't grow an inch.  Yeah, sure, the poppers strained a bit, and the sleeves looked a bit short, and the kids' feet turned in on themselves somewhat, but the babies didn't get any bigger.  I thought of writing to the Babygro suppliers under the Trades Descriptions Act, but I was so busy taking the kids to their hospital appointments with the Growth Specialist I didn't have time to pen the letter.

Turns out it wasn't their hormones after all.

Back to the tin foil it was, then.  I should have known better than to listen to people who said they needed to be in 'proper clothes'.  I found the giant catering packs of foil did the job very well until the kids were teenagers, and their limbs straightened out a little, but then they rightly pointed out that it was no good shouting up the stairs and telling them to STOP MAKING SO MUCH NOISE when we'd dressed them in stuff which crackled if they moved an inch.  Fair point.  We stopped complaining about the noise.

Now they've left home (they all went pretty early - I reckon that was to do with teaching them to be independent, though I hate to brag) I miss those morning sessions wrapping them up in the kitchen foil and putting their rucksacks on their backs for them and seeing them off on the school bus.  There was talk of bullying and teasing, but you know how kids are.  They blow things up out of all proportion.

Anyway, modern mummies and mommies and daddies and doddies.  Take a lesson from an experienced old hand and save yourself some cash.

PS  Foil, right?  Foil, not cling film.  What? You want the kids to look like idiots or what?
Me opinions Me pretending to be a Mommy-blogger