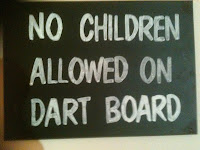 'Oh, shucks,' says a stressed mummy.  'Just as I was going to hook little Billy up there and find a way to have him pinned in one place for more than 5 minutes so I can have a bit of peace and quiet.  Now what do I do?'

I know!  I'm going to rearrange the words to make different meanings.  Just because I can.  I wonder how many different combinations I can get out of this?.......

Children no allowed on board Dart - a notice devised by a foreigner who hasn't quite got the idea about how to form negatives, posted near a ramp leading up to an adults-only pleasure yacht named Dart.  On board Dart, things happen which children are not permitted to view.  The yacht is called Dart because when it goes, it goes, and if you're caught doing adults-only things when it starts off, you will fall over for sure and, if you're on deck at the time, probably overboard.  Which will give the kiddies a good laugh anyway and make up for no being allowed on board.

No dart allowed on board children - this is a notice you'll find in a lesser-known Amazonian jungle area to warn people not to shoot darts at certain types of children. These children are very special because they are the spawn of an Amazonian tribeswoman and a piece of tree bark she mated with, having found the tree bark to be a more entertaining companion than her husband who only ever wanted to talk about how big the fish was that he caught that day. If you shoot a board child with a dart, the dart pings back at you and kills you, so you'd better do what the notice says, or you're carrion.

Board allowed on no dart children - dart children are all the love-children of Usain Bolt.  There are many, and they have all inherited his incredible speed; as soon as they can crawl, they are doing it at 100 metres in 10 seconds, causing myriad problems for their mothers as the babies shoot up and down their halls like billiard balls and won't stop to have their nappies changed.  Oh, the board bit.  Er ... well ... er ... *thinks* ... ah yes!  In an attempt to stop this new species of dart children from reproducing, the government has instituted a Heavy Board law, and any children who are born to Usain Bolt have to have a board strapped onto the tops of their bodies to stop them from kicking their legs, thus preventing muscle development.  As this has made breastfeeding difficult, the Health Visitor Association have campaigned furiously to get the law repealed, so it hasn't been that successful a law yet.

Children-Dart allowed on no board - The Children-Dart is a new game becoming popular amongst fashionable people of child-bearing age and involves racing your friends to see who can start their families first and breed the first Mothercare catalogue models.  However, the one rule is that you are not allowed to procreate on a board.  Why would you do that, I hear you ask?  What?  You have not heard of the new practice from America involving making love on a board in order to increase your likelihood of having a child?  Tut tut.  Research has been done, my friends, and now the word is out, all the celebrities are getting it on while lying on a piece of wood and telling Hello Magazine all about it.  No, it's not comfortable, but then these are the same people who have their foreheads injected with poison and their noses reshaped to look like Nero's.