Evidence - more evidence than you ever thought possible - that opposites attract

May 11, 2014
Okay, so now a man who is a woman but who has a beard and who has a high voice has won the Eurovision Song Contest, we need another way to define identity, sort out who's who, and know where the boundaries are drawn.

I have the answer.  We can divide the human race into two neat categories by answering this question. Delete as appropriate.

Are you the type who is driven mad by a loudly ticking clock?  Yes/No.

We could also, I suppose, divide ourselves by answering this question:

Are you the type who is driven mad by a sudden and unnecessary increase in font size?

But we won't, because I want to discuss clocks.


I am a woman, and my husband is a man, and although this helped us with procreation, none of those old distinctions matter any more.  They might, I suppose, if poverty strikes us, we only have one piece of clothing between us and it happens to be a pair of Y-fronts, which is a very good reason for us to continue in employment as long as possible.

My husband is to ticking clocks what a carnivore is to a nice rocket and asparagus salad with a herb dressing.  I, on the other hand, abhor silence and have to have something on in the background.  If the only something available is a ticking clock, I'm cool with that (as my grown-up kids tell me not to say).


When we go to stay at my mother-in-law's house in Greater London, my husband unhooks her arrogantly-clicky clock from the wall in the living room and puts it in a cupboard.  His mother tolerates this, as long as he promises to replace it when we leave.  Often he forgets, and we get a plaintive phone call that evening, on our return to Leamington Spa, from a 90 year old who is less than five feet tall and who can't reach to put the clock back up.  She is most forgiving of him, but I suspect he might get a shock in her Will; either he will get less of the inheritance, or, worse, she will just leave him the clock and serve him right.

We had a foreign student to stay once: a teenager from Spain.  I did a pile of ironing for her which I put on a chair in her room.  Later that day, my husband needed a nap while she was still at English Language college, and as I was working in our bedroom, he lay on her bed to sleep.  Before he did, he took the ticky clock off the wall and slid it between some of her ironed clothing to silence it.

When she got home that evening, she went upstairs, and then came down again with the clock and a very puzzled expression. 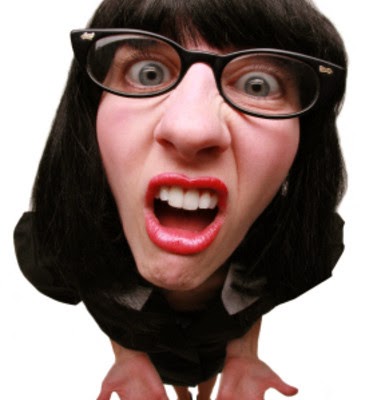 It took a loooooooooooong time with a Spanish-English dictionary to explain, and even then, I think she went back to Valencia with stories about her British host family which I suspect meant she hasn't been back to England since.

We bought a digital timer for the kitchen some time ago, but it hasn't been working properly, so my husband went to the shops yesterday and bought a manual one, which looks like this. 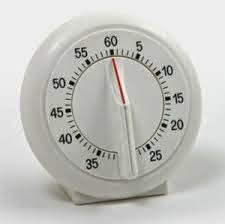 He hadn't thought this through at all.  When we gave it a test run in the kitchen, we realised that it has a tick which sounds like a woodpecker with a megaphone and an aspiration to be a town crier.  'You're going to be a dribbling wreck if we use this,' I said.  My husband went into the lounge to see if he could still hear it.  Yes.  Into the front room of the house. Yes. Upstairs.  Yes.  When he could still hear it in the bathroom with the door shut and the taps running, we knew that £4.99 or no £4.99, this had not been a bargain purchase.

Bizarrely, too, the timer comes with a string, so that you can hang it round your neck.  'Why would you need to?' I said to my husband.  'You could be on holiday in the Maldives and you'd still hear it ring from Leamington when your egg has boiled.'

I've suggested we take it to his mother-in-law's next time we stay, so that at least if he forgets to put the clock back up, she can set the woodpecker going and let it click away until someone tall can come round.

So, I'll ask again, only more quietly, just in case you're like my husband and find noise an intrusion. (Who said, 'And he married you?'  Just answer the damn question, cynic.)

Are you the type who is driven mad by a loudly ticking clock?  Yes/No.