May 30, 2014
I never thought I'd be the type to watch videos/read news items featuring cats.   But, as with many of my principles, that one's gone to the *realises using dog metaphor will sound odd in a sentence about cats* place where all the others have gone.


1. I have watched the cat who plays Jenga with its owner

2. I have read a news item about paintings made better with cats

No.  I was going to make a list from 1 to 10, but I am already wondering whether this post was a good idea at all.

Let's talk about something else.

Someone bought me this chocolate Scrabble board game. 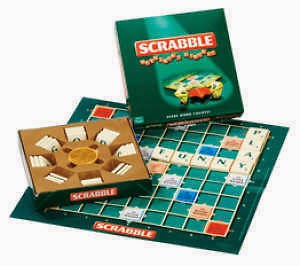 You can only play it once, because when you've played, and eaten the chocolates, that's it.  I don't think you can get replacement chocolates for it.  My question is: on a scale of 1-10, how immoral would it be if, too lazy to play the game, I just opened the box and ate the chocolates?  How good an excuse would I need?

Talking of excuses, I was shocked once when I asked a group of very respectable students how many of them would tell me their printer was broken when it wasn't, just so they could get an extension on a piece of homework.  90% of them said they would.

'It wouldn't be a proper lie,' they said.

'What's a proper lie?' I asked them.  This was in a General Studies lesson and we were discussing ethics and morals.

'A proper lie is, like, my dog ate the homework.  Except that no one believes that, so we have to use the printer one.'

'But now you've told me 90% of you would tell the printer lie, I'm never going to believe that one either.'

'It's like that Hilaire Belloc poem about Matilda who kept hanging out of her window to say the house was on fire when it wasn't.  The one time she told the truth, no one listened, and she burned alive.'

'That's a bit harsh, Miss.  Aren't you taking this a little too personally?'

Talking about dogs, I'm reading a book called 'Travels with Charley' by John Steinbeck, which is about his decision to travel in a camper truck all around America with his dog.  I wasn't expecting it to be funny, but it is.  You should try it.  Reading the book, I mean.  Not travelling in a camper truck all around America, although don't let me be the one to stop you following your dreams.  Just remember, when your spouse realises you're not home for dinner and your coat isn't hanging in the hall as usual, and they check the bank balance to find you've spent half the bank account on fuel, don't put the blame on me.  I just mentioned a book, that was all.

Talking about spouses, if the plural of mouse is mice, why isn't the plural of spouses spice?  Is it because the conversation of polygamists would be too easily misunderstood?