Reasons why I had to slice my cheese today

May 03, 2015
My sister bought me a grater for my recent birthday. She'd read this post mentioning difficulties with controlling grated carrot and decided to help me out. The grater has a container underneath it which is meant to catch all the gratings. Here it is. 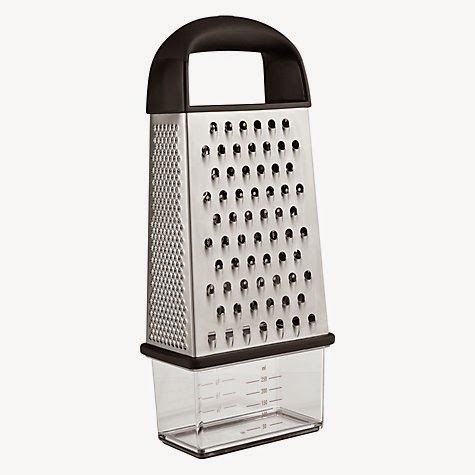 It's very shiny and sharp. You know how when you decorate a room, the rest of your house looks shabby and ashamed? My old grater looked the same, once compared with the newcomer - all sorry for itself in its decrepitude - so we threw it away and my husband said he'd find a place for the new one in a kitchen cupboard.

I was going to use it this afternoon. My husband went out for a walk, and I'd done seven hours' solid A level marking, having started at eight in the morning, after which I think I deserved a five course meal in a Heston Blumenthal restaurant and a night in the Hilton, let alone flippin' cheese on toast. I put some bread under the grill. I got the butter ready. I found the cheese in the fridge. Then I looked to see where the grater was. I tried all the cupboards, but couldn't see it anywhere.

I knew I shouldn't have let my husband Put it Away. He can Put-Away for England and once he's Put Something Away, your hopes of finding it without a compass, a map and a good sense of direction are as slim as a banker's conscience.

In the end, I had to slice the cheese instead of grate it. Okay, it's a First World Problem, but I was intending to send my sister a picture of my grated cheese all tidy in its box and brighten up her day.

I think my husband must have had a deeply traumatic experience in his childhood. Perhaps one day he didn't put his socks in the washing basket and his mum grounded him for a month. All I know is, he lives by the principle of 'Anything Left Out Gets Put Away'. Sometimes, when I'm cooking, I get out a spoon to use later, then find when I need it he's already washed it, dried it, and Put It Away.

He'll take your mug from you well before you've finished the tea. He'll tidy up a magazine when you're only on page 2 and just stopped reading to go to the toilet. I swear he looks at me with intent when I sit down for too long, wondering if I'll fit in a corner of the wardrobe.

He's useful, though, when it comes to holidays. He can pack a case or the back of a car like Cassius Clay could pack a punch. He squeezes it all in, fitting toiletries into shoes, and rolling towels up to nestle in suitcase crevices.

The only thing is, it's all fitted in so tightly that when you open a case he's packed, or a cupboard, or a drawer, things spring out, like suppressed emotions, and all hell - and socks, deodorants or cans of beans - break loose, like Jack in the Box.

It's probably morbid of me to muse on what he's going to do with me if I die before him, and how he's going to stuff me into my coffin. I can see it now.

Anyway, when my husband came home from his walk, I asked him where he'd put the grater. He showed me. He'd slid it in between a box of pegs and a food mixer, sideways on, so that I didn't recognise it at that angle. It was like one of those quizzes where you're shown a picture of a gadget but from a weird perspective and you have to guess.

'I had to have sliced cheese instead of grated,' I said. But for some reason, he thought I was making a fuss over nothing much.


Me at home Me husband