I decided not to work as an examiner, marking GCSE English Literature, a job I've done for eight years every June/July, on top of my schoolteaching.

I'm not sure I will ever sign up to examine again, even though the hefty cheque was welcome. But, during June, I kept finding myself in the garden with a gin and tonic and a book, or writing for a whole evening, or wandering around the town looking in shop windows, or watching an episode of Flog It, and thinking, 'Why does this feel strange?' Then I'd remember, and a frisson of pure delight hurtled through my veins yelling 'Yaaaaaaaaaaaaaaaaaaaaaaaaaaaayyyyyyyyy!'

Looking back today through my past writings for the Times Educational Supplement, I found a copy of a 'diary' piece they published in 2007, my first year as an examiner. It will tell you all you need to know about why I thought it was time I had a year off.

Here's the piece. It's pre-empty-nest stage, too, which has just given me another little frisson, only not joy this time *sobs*. 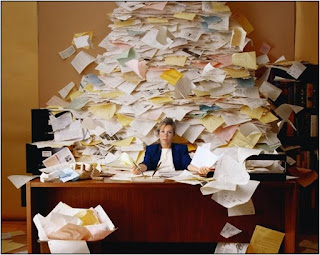 Last night I hit One-Hundred-and-EIGHT-y.  I wasn’t playing darts; I was marking GCSE English Literature scripts.  Still, I sang out the number like they do on the telly so that the rest of the household could celebrate with me.  No-one batted an eyelid.  They all know I’ve got 300 still to go and that until early July all they’ll get from me is monosyllabic grunts, the occasional yelling out of numbers and snappy orders for someone else to answer the phone.

The most popular poem students are writing about is one in which someone’s genitals get bitten off.  That’s their interpretation anyway.  The word ‘genitals’ has been spelt 43 different ways.  Some students approach the subject quite delicately, along the lines of ‘the narrator wants to do her ex-lover harm’.  Others just go for it and add unnecessarily sordid detail to the description.  They’ve probably been told they’ll get extra marks for detail.  Not from me, they won’t.

My husband has offered to do the shopping this week, but insists on planning the list while I’m struggling with a tricky script.  I’m just puzzling out the difference between the criteria ‘some comments on detail’ and ‘supported comments’ when he asks me whether ham and new potatoes will do for Friday’s tea and what should he do with the butternut squash?  I have only one suggestion to make about the squash.

It seemed like such a good idea when I signed up.  Now, slogging through script 237, I keep thinking about some of the stories we were told at the New Examiners’ Day about scripts being found floating in rivers and abandoned in car parks.  It seemed so shocking that anyone could do that.  Now I wonder why it was only the scripts found floating in rivers.  My Team Leader rings to see how I’m getting on.  ‘Fine, fine,’ I say.  She calls me a liar.  She’s seen it all before.

I’ve now marked so many essays on ‘Of Mice and Men’ – a book I used to love - that I vow never to teach it again.  I woke sweating last night yelling ‘I want to tend the rabbits’ and my husband had to make me cocoa and put a damp flannel on my forehead.  Everyone teaches ‘Of Mice and Men’, because a) it’s short; b) it’s in the stock cupboard; c) there’s a good video, not necessarily in that order.  But it just has to stop, otherwise examiners like me will be found lurking by riverbanks clutching poorly-wrapped parcels and peering into the deep.  I hit the magic 250 and pour myself a large Pimms.  There’s no point shouting out the number.  Everyone else is out at a friend’s barbecue - in the sunshine.


Me and work Me at home