Reasons why using mugs you hate can be a good strategy


Is someone who steals other people's work mugs a cup-leptomaniac?

There was a cup-leptomaniac in a previous school I worked in. You could try to keep your own, dedicated mug in the staff room cupboard, but it wouldn't last long. Someone would lift it, perhaps thinking, 'I'll bring that back later.'  Or perhaps, 'I'll sell that on e-bay with the other ninety-six.'

Even now, eight years since I left that school, I'm sure teachers are unearthing stolen mugs in dark corners of classrooms, cultivating a foot of green moss over a spongy layer of prehistoric coffee.

However, it was a boys' school, with mainly male teachers, and I found a cunning plan to make sure I kept my own mug for most of the time I was there.

While I've been writing this, I've remembered. I put some verses about my cheesy kitten mug into the leaving speech poem I delivered on my last day at that school. They went like this.

I’ll also miss the Staff Room and its kitchen:
The Bermuda Triangle for Mugs, it’s true.
I miss my cheesy kitten mug especially.
(You should be feeling guilty if it’s you.)

It cost me just a quid somewhere in Hounslow;
The cheesiest kitten face you ever saw.
Now Kitty’s festering somewhere in a corner


with mould and mildew on each little paw.

A colleague in the English Department was notorious for using other people's mugs then leaving them on windowsills, coffee half-drunk. Somehow it became my job to clear up after her. I wrote a verse about her, too, in the poem. Names have been changed to protect the definitely-guilty.

I’ll miss Mary's mould formations in the coffee
that she’d made, but then forgot to drink.
They were beautiful, those different types of fungi
but a bugger to force down the kitchen sink.

Do you have a favourite mug? I always have a current favourite. We're very good at smashing mugs in our house on our stone-tiled floor, so I get to ring the changes often.

This month, it's one my sister bought for my birthday when I was in Cornwall with her, in the seaside town of Looe.  Appropriately, it's a mug with a fish design. It looks like this. 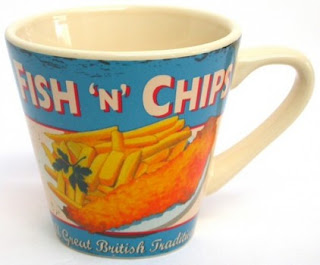 Ha ha. Not really! It's not as crass as that. But you believed me, didn't you? You weren't at all surprised. 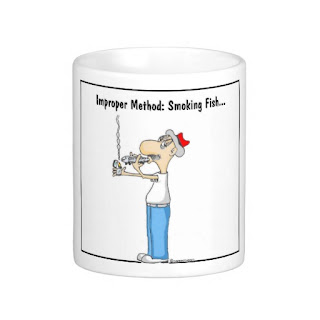 No, not that one either. But it made me laugh.

*goes back to Google*

Dur! Why don't I take a picture of the mug?

I am so dim. I am also nearly 54 and so not techno-natural.

I'll go and do the picture. Wait around a while. I am to smart-phone operation what Frankenstein's creature was to the supermodel industry.

I'm back. Did you have a nice fortnight?

Say hello to it. It'll only be a week or two before it dies a tragic death on our kitchen floor.

Tell me your own muggy stories. Or if you want to own up to being a cup-leptomaniac, I'd like to hear about that, too. I won't turn you in. Unless you stole my cheesy cat mug.

Me and work Shopping Me