Reasons why Fran's ribs are fine but her feet are not

June 26, 2016
I bought a new non-slip bath mat. But I am a spectacularly unsuccessful shopper and could not sing, along with Edith Piaf, 'Non, je ne regret rien' because I rue 90% of my purchases.

Neither can I speak French, so that's another reason.

And she's dead, so singing along is probably too high an expectation.

We never used to own a bath mat. But our shower is an over-the-bath type, without the dimpled surface one gets in a purpose-built shower unit. Since my husband slipped a couple of years back while showering, fell forward, and landed on his ribs on the edge of the bath, we've used a mat. Yes, ouch. He broke two ribs and, as you probably know, medics do nothing for broken ribs these days unless the shards have pierced your lungs, your lips have gone blue, and your eyes have disappeared into the back of your head.

I remember the Summer of the Spouse's Broken Ribs well, because four weeks later, with his chest still the colour of blackberries, we travelled to the Lake District. We'd booked a pretty holiday cottage and didn't want to cancel.

Because we don't drive, we took trains and buses, and I had to manage all the luggage including a case the size of the Lake District itself.

This was fine while we were on the flat, as the case was on wheels, but when we arrived in Grasmere, and took the 'short walk from the bus stop' that the holiday cottage details had promised, we found we had something like THIS to traverse first. 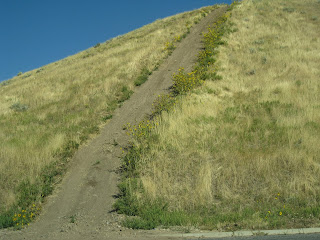 We made it, but the words 'solicitor' and 'Do I get the piano or do you?' had been mentioned on our way there.

Back to the bathmat.

My first response when I ordered the mat from Amazon was one of amusement because of the description of it.

I have filed the description away because next year I'm teaching A level Linguistics and it will provide me with an entire lesson on pre-modifying and post-modifying adjectivals, ambiguity, noun phrases, the use of parenthesis, syntax, advertising conventions, and the most important lesson of all, don't buy this kind of bath mat.

Here is why 'Oui, je regret everything' about my new purchase.

1. The description says it's green. Our bathroom's colour scheme is 'aqua' and the picture of the mat made it look a similar shade. It is not. It is a green so garish that, in the middle of the night, there is no longer any need to put the bathroom light on. If the window's open, the bath mat attracts moths, mosquitoes, and the occasional ship out at sea.

2. It is so non-slip and anti-slip that, when you try to detach it from the base of the bath after a shower, its rubber suckers cling to it like stubborn monster-limpets, and the resulting noise means that people in New Zealand look up in the street and wonder if bad weather's coming. No, we're not going to slip and break our ribs. But we might pull a muscle wrenching the damn thing out of the bath and one day the bath may come with it.

3. Its 'massage function', which I assume is meant to give the soles of your feet a mini-workout while you shower, takes the form of raised pads on its surface.  But 'massage'? Imagine Astroturf that's been starched, or something like this.

I need to buy another one but this time I'll go into town so that I can 'feel before I buy' and make sure it's a bath mat and not an instrument of self-harm.