Reasons why Fran's neck is cold

I went into the hairdressers. 'I've had it short for so long,' I said, 'so I've tried growing it longer this year, and it looks fine....'

'... as long as I'm standing still and there's no breeze or anyone near me breathing heavily or using a hand dryer.' 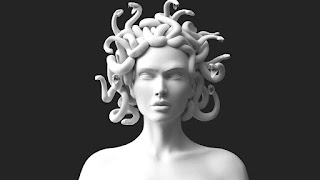 'Are you sure about this decision?' she said.

'Couldn't be more sure,' I said. 'Anyway, a friend told me longer hair made me look more mature. I felt like an ancient cheese. And that decided me. Also, I've been trying to blowdry it in the mornings, so that I look like the people in the magazines.'

'I was thinking 'Glamorous Hair' magazine, not 'Crufts Monthly.'

'So why am I being chased down the road by Afghan hounds?'

She washed my hair and cut it. Chop, chop, chop. Snip. Chop, chop. My hair slumped to the floor in clumps. Slumpy clumps. This must be how sheep feel, I thought. Naked. Vulnerable. Cold.

I haven't seen my face properly for a while. It took some getting used to. 'Hello, face,' I said. 'How are you doing?'

'Okay,' it said. 'But suddenly exposed and over-sized. My nose feels enormous, like a tusk.'

'Do you want me to cut your hair above your ears?' the hairdresser said.

I told her no. 'I swear my ears are getting bigger as I age,' I said. 'Some people end up with ears like cauliflowers, don't they? Soon I won't be able to get through narrow doorways. Keep them covered.'

When I'd gone into the hairdressers, it was autumn. Walking home, it was winter. My head felt light, as though I'd taken a heavy hat off, or had emerged from under a duvet.

The next day, at school, one of the students said, 'Have you had your hair cut, Miss?'

'I met this angry lawnmower on the way to school,' I said. 'A short fight ensued, and this is the sorry result.'

Another one commented in a different class, 'You've cut your hair, Miss.'

'I needed a quick way to lose weight,' I said.

'That's actually quite funny,' she said to her friend, as though teachers plus humour equals WEIRD!

But most people looked, widened their eyes, but said nothing. I'm sure Gorgons get the same reaction when they appear, minus the snakes, in elfin haircuts.