Reasons why Fran is glad of the fickle British climate


Twice now, we have accidentally had a Christmas barbecue, both times because my daughter-who-was-a-contestant-on-Masterchef has arrived at our house with the Christmas meat, over-estimating the size of our oven.  Once it was a piece of beef which was so big and boastful, we had to tell it to breathe in before it came through the front door, let alone the oven door. Last year, she brought a goose which had an ambition to be an Olympic shot-putter and had been undergoing intensive training before its hopes and dreams were cut short. Both the beef and the goose found themselves being barbecued in our back garden, there being no room in our tiny oven for roast vegetables and meat with pretensions. We took turns togging up in hats and coats to baste or check the meat, avoiding the twitchy curtains of the neighbours who wondered why, if we wanted a barbecue at Christmas, we didn't just move to Australia.

The picture below is of the meat loaded onto an uber-skewer in my daughter's kitchen, with a smug duck looking on, glad it wasn't his turn. So that you can get a sense of the size of the skewer, I will tell you that the bench is about five feet long. The partner who lives in London but really wants to be a farmer is also a skilled carpenter who made my daughter a table and benches to seat ninety. If they do achieve their ambitions and move house, I think the house will have to be lifted up by a crane so the table and benches can be removed, and the table and benches will need to have wheels attached so they can be towed down the motorway towards Sussex or Wales or Ireland, wherever the farm is. 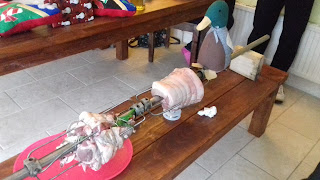 Here's the pork and lamb cooking over hot coals at the bottom of the garden. 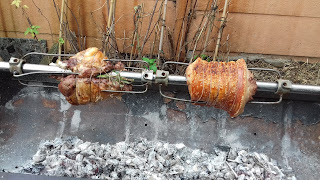 Christmas Day, weather-wise, looked nothing like any of the Christmas cards. Not a snowflake in sight. In fact, it was such a mild day that we could sit outside, without coats, and watch the meat on the spit. So, our Christmas Day entertainment went like this:

No, it's not Charades, and we had to catch up on the Queen's speech later, but watching meat cook for hours and hours and hours makes you relax. Our modern, instant cooking methods that we use day to day don't provide this same sense of 'Aaaah, that's better!' It's just not the same, peering at the dial on the microwave while it goes 59, 58, 57, 56 ....

There was some incongruity within this pseudo-rustic scene in that my daughter's house is in Isleworth, next to Heathrow Airport, and the planes fly over her garden so low that you can order a drink and a snack from a member of BA's cabin crew and watch a scene from Shrek 3 before the planes move on. Occasionally, when one of us said, 'Those juices are less pink now', no one heard. You can't imagine how noisy those planes are until you've sat in my daughter's garden and felt a hot undercarriage singe the top of your head as the aircraft flies off to New York or Italy or Africa.

Every five minutes, someone said, 'Shall we taste a bit?' so we sat in a line, our mouths open just like the beaks of baby birds in a nest, and tiny slivers were sliced off and deposited in our mouths like little sweetmeats.

At five, we sat down around the mahoosive table in the kitchen, squinting through the candlelight at other family members sitting far away at the other end of the table, and calling to each other for salt or to pass the parsnips just as Heathcliff calls to Catherine across the North Yorkshire moors. In the middle of the table was an Everest of fragrant, juicy meat, and if you're a vegetarian, and still reading this, WELL DONE, YOU!

With the meat, we had homemade mint sauce and cranberry sauce and apple sauce and crispy potatoes cooked in goose fat, and parsnips and carrots and indigestion and regret.

But it was fabulous.

As an addendum, here's a picture of one of the parsnips, which I dubbed an octoparsnip. I think you'll see why. 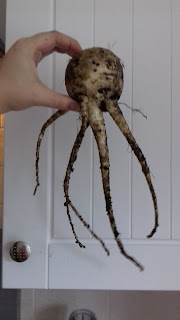 me and food Me at Christmas Me memories