The story of Goldisocks and the Three Beans

December 11, 2016
Once upon a time, there was a little girl who lived in the land of One-Wrong-Consonant. Her name was Goldisocks.

Goldisocks had bright yellow hair and socks to match. This made it hard for her. When you spend your spare time peeking in at the windows of strangers, trying to be subtle, buttercup-yellow hair is a disadvantage in itself. Having matching socks that would light up a Norwegian Arctic winter or guide a ship into port in a wild storm makes it all more challenging.

Nevertheless, Goldisocks skipped off one morning into the woods and found herself in front of a cottage she had never seen before: the home of the Three Beans. Here they are in the picture below: Daddy Bean, Mummy Bean and Teen Bean. Mummy Bean is the one on the right whose face shows open distress and I'm about to tell you why. 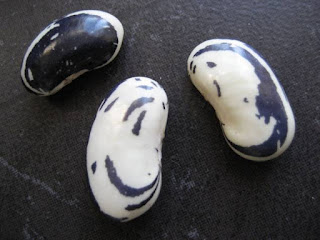 Earlier that morning, before Goldisocks was up and about, the three Beans had been arguing over breakfast. Teen Bean had been grumpy and hard to please (he's the one at the top of the picture slathered in Marmite but prone to tantrums when Mummy Bean asks him to go and have a wash).

Also, Mummy had yet again served up poorly-cooked Quaker Bats. And, as intelligent readers well know, there's nothing so galling as having bats served up as your breakfast which aren't at the right temperature.

'My bat is far too hot,' said Daddy Bean, flapping at his steaming mouth.

'My bat is just right,' said Teen Bean, as sullen as thunder, 'but I don't want bat.' He shoved his plate of just-right-bat away from him and thumped the table. 'I want more toast and Marmite.'

'More Marmite, darling? Are you sure?' Mummy said, trying to be conciliatory but feeling as hopeful about this as someone hanging from a cliff by cheap nail-bar false fingernails.

'You are already more Marmite than face, son,' said Daddy Bean. 'Let's go to the coffee shop at Waitrose. I'm going to have one of their bath nuns.'

Mummy Bean frowned. For some reason she couldn't work out, that had sounded like something Daddy Bean shouldn't have said in front of Teen Bean.

This all explains why, when Goldisocks turned up to peer through the windows of the Bean house, there was no one in.

She looked around the room. In a row alongside the kitchen wall were three chains. 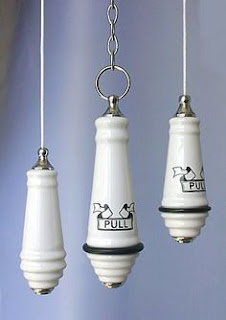 What she didn't know, and neither did I until thirty seconds ago, was that Daddy Bean was a collector of traditional-style bathroom accessories. This was because ... this was because .... *thinks* .... this was because his father, who'd been a plumber by trade, had died in tragic circumstances while fitting a state-of-the-art, ultra-modern toilet in a customer's house. He'd hated the new styles, but had reluctantly agreed to install this toilet for the longstanding customer. It had fallen on his foot during the installation. The foot had turned gangrenous and within days Bean Senior was dead. Daddy Bean had started his collection instantly to preserve his dear father's memory, hence the three chains suspended from the ceiling in the Beans' kitchen.

Goldisocks couldn't contain her curiosity. Like all little girls in fairy tales, she talked to wolves, bit into obviously dodgy apples, and went into forests alone. She wasn't going to resist pulling a toilet chain if she got a chance. She pulled Chain 1 gently. Nothing happened, except that it swung a little then returned to stillness.

She pulled Chain 2, a little harder. It swung for longer, twisted round, then back again, then went still.

She pulled Chain 3 with a yank so hard that the ceiling to which it was fixed came crashing down around her ears, as did Teen Bean's bed which landed on top of her. She was hidden by rubble, a bed, and frothing clouds of dust.

She was a very lucky girl. The Beans were on their way home, cheerful after a much more successful breakfast. Particularly, Mr Bean had enjoyed his bath nun, more than perhaps he should have.

The Beans gaped in disbelief, squinting through the dust and cough-coughing, at the heap of rubble in their kitchen. What could have caused it? Had they left the toaster on?

Teen Bean suddenly said, 'Dad! Is there a fire burning underneath there?'

But it wasn't a fire. As they looked closer, they saw a tiny beam of yellow, shining out from beneath the dust and destruction like the glare of a lighthouse from out of the sea's darkness.

Daddy Bean stepped forward and balanced awkwardly on the rubble pile - balance isn't a bean's best skill - to take hold of what he thought might have been a bright yellow fragment of Teen Bean's bedding (Teen Bean had nagged his parents for a Despicable Me duvet cover he wouldn't want any of his school friends to know about). But as Daddy Bean tugged the yellow material, it came off, and revealed a toe. He scrabbled away some brick fragments. A foot. And from underneath the rubble, a groan.

Mummy Bean called the Fire Service while Daddy and Teen Bean foraged at the rubble to reveal more and more of a sorry-looking Goldisocks. Minutes later, firemen having arrived to join the search, she had been rescued from the devastation, sobbed a thousand apologies to the Bean family for all the trouble she'd caused them, and been taken to hospital to be checked over.

'She left this behind,' said Teen Bean, holding up the sock which was still luminous despite a covering of dust, while watching out of the window as the ambulance disappeared. (He wasn't aware, but on another continent, the sock's brightness meant three planes changed direction and someone reported seeing a UFO.)

'That's not all she left behind,' said Daddy Bean, crossly, dialling a local builder to start the renovation process. 'I hope we never see her again.'

Teen Bean was thinking otherwise. He'd liked the look of Goldisocks with her sunshine hair, outrageous socks, and clear predilection for doing things she shouldn't.  He laid the sock on the windowsill reverently. It glowed with promise, he thought.

'Come on, everyone,' said Mummy Bean, trying to draw the family together in the crisis. 'We're well rid of her. We'll start clearing up. But before we do, let's all have one of those yummy sugary toughnuts I bought from Waitrose.'

He didn't know it, and neither did Goldisocks, and neither did I until roughly three minutes ago, but he and the girl in the yellow socks were made for each other in more ways than one and there was a happy ever after to come, in which Daddy and Mummy Bean would have more peaceful breakfasts without Teen Bean's militant face, and in which Teen Bean and the new Mrs G Bean would soon celebrate the births of their identical baby twits in One-Wrong-Consonant's City Hospital.