June 20, 2017
On birthdays and at Christmas, while we were raising our kids, there was always one present that had to be opened first. It would be sitting on the dining table, ready to be unwrapped before breakfast.


The childhood ritual was this. On special occasions, we made an exception to the sugary cereal rule, wrapping up a box of Frosties, or Coco Pops, or Sugar Puffs, for their breakfast.

It looked like this. I'll find you a picture.

*Googles: 'Frosties wrapped in Christmas paper. Google says, 'But why would there be such pictures? Who would DO this to their children?' and yields nothing*

Okay, here's a packet of Frosties. 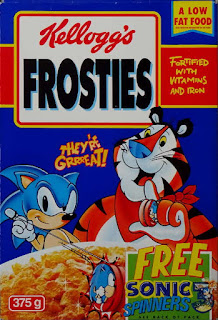 Please imagine that, wrapped in the paper below. I say this, not because this is the actual paper we used, but because I wish it had been available when the kids were young. It's junk food wrapping paper, and would have reminded them, in the true spirit of celebrations, of all the other things we never let them eat. 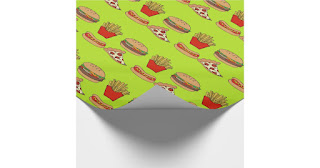 The ritual changed in nature over the years.

When they were only little, they ripped open the package, desperate to get at the sugar, like little honey bees on the frantic search for nectar, and saying 'Thank you, thank you, Mum and Dad!'

As you all know, this kind of innocence doesn't last long.

As they got older, they groaned when they saw the package. But they opened it anyway and grudgingly spooned the cereal in as we said, 'Merry Christmas, kids!' and winked, as though we were the Most Amusing Parents Ever.

Once they hit the teenage years, the ritual continued, but laced with a heavy sense of irony. For a start, they were busy gobbling sugary cereal at every friend's house they could possibly wangle a sleepover at. I imagine that, at teatime, when asked by a friend's mum if they'd like sausages or chicken, they'd say, 'Do you by any chance have Coco Pops?' and making this kind of face. 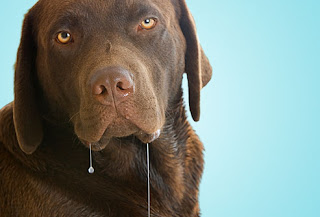 Also, they were old enough to pour themselves a bowl of Bran Flakes from our kitchen cupboard but then lace it with a layer of sugar thick enough to masquerade as a snowdrift.

On family holidays, sugary cereal became mandatory and if we took a box of All Bran with us, Paul and I would be the only ones eating it while everyone else laughed and poured themselves a third bowl of Sugar Puffs.

Now they have left home, we visit their households for Christmas. Last year, we stayed with our two daughters who share a house. There was a familiarly-shaped present waiting for us before breakfast. The girls were guffawing as we opened our box of Bran Flakes.

me and food Me at home Me memories