Reasons why Fran likes her Mondays off work

July 09, 2018
Most Mondays, my day off work, I go to fetch my grandson Elijah from school. He's six now, having had a birthday last Thursday, and he's got to that leggy stage when they change from small child to boy and suddenly their trainers take up more of the hallway and their appetites take up everything in the fridge.

Here we are, in Zizzis, celebrating his sixness. He's wearing his birthday shirt. I look as though I'm wearing a large garden, I now realise. 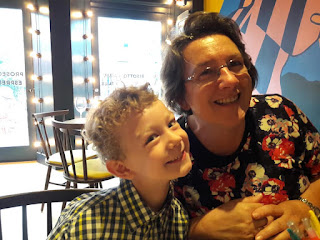 Back in the winter, the pick-up-from-school routine went like this:

Welcome Elijah out of school at 3.15 in Arctic playground and persuade him into his coat, gloves and hat.

He says, 'Can I go and play on the swings just behind the school?'

I say, 'It's really cold. Let's go to a cafe instead and I'll buy you cake and hot chocolate.' (This is called bribery generosity)

Get into the cafe and sit him at usual table while I queue up. Pick up his scooter from where he's laid it mid-aisle. Discuss scooter etiquette.

Buy him a cake and a giant hot chocolate ('Don't put cold milk in it, Grandma. I want a grown-up one.')

Watch him acquire a chocolate smile and a cake-crumbed school jumper.

Hear him read his reading book. Help him with difficult words. Feel conflicted: am I Grandma here, or English teacher?

Take him to the toilet and cover his ears for him while he dries his hands under a hand dryer that sounds like a jumbo jet.

Race for the bus and stamp our feet and shiver while the bus decides whether to arrive or whether to pootle around Warwickshire just having a nice time.

Sit on bus, making portholes in steamed-up windows so car-enthused Elijah can scan the roads for Aston Martins and Mercedes and BMWs.

Deliver him home, all caked and hot-chocolated and grandmothered.


Now it's summer and the UK weather is all hot and bothered, thinking itself on holiday in the tropics, the routine is very different. Also, the family has moved house. No bus needed.

Wait in scorching playground to collect Elijah from school. Have in my bag a banana and a bottle of fridge-cold orange juice.

Persuade him into his sunhat. Lather him in suncream until he's as slippery as a hot fish. Collect his scooter from the rack.

He says, 'Can we go and play on the swings just behind the school?'

I say, 'I would much rather Wouldn't you rather go home and stay in the cool shade of the garden?'

'Five minutes then,' I concede.

He says, knowingly, 'Is there a banana in your bag and a drink of orange juice, Grandma?'

He considers, and says, 'No, I'll keep it for when I have no energy after the park. I will need vitamins then.'

Trudge to the park while he scoots ahead, his curls bobbing. Stand under a tree for shade, guarding the scooter, while he climbs poles, swings 'as high as the clouds', takes risks on the roundabout and yells to his classmates also approaching the park ('Hey, Josie! Look how high I am!').

See his grin when Josie asks him to play hide and seek with her. Watch his puzzlement when I say, 'Make sure I can still see you when you're hiding.' Observe their hilarious attempts to hide behind ladders and poles.

Give him a five minute warning.

Five minutes later, note how much fun he's having, showing off his monkey skills on the overhead bars while Josie admires him, and give another five minute warning.

Call, 'Time's up. Come and get your banana and drink. Don't even think about complaining.'

He yells, 'Bye, Josie!' and slowly walks towards me, exhausted and spent bolts across the park towards me, cheeks flushed and shirt hanging out unevenly from his school shorts. Tie askew.

Walk home with him devouring a banana and sloshing back orange juice like a beer drinker on a bender.

He says, 'My friend tripped me up so I kicked him in the peanuts.'

We stop for an ice cream at the shop. He licks it into shapes as we walk home. 'Now it's a hat.' 'Now it's a mountain.'

He says he visited Warwick Castle last week with school and tells me what he knows about moats, portcullises and knights.

'Do you know about jousting?' I say.

We reach home and borrow his father's laptop to look up jousting. Youtube doesn't disappoint in terms of jousting shows and medieval re-enactment societies and Elijah's eyes are as wide as plates.

He wants me to look up 'the real fighting the knights did when they lived at Warwick Castle' and we have a discussion about when Youtube and cameras were invented. 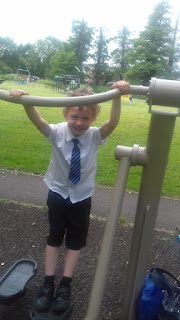