Evidence that horses, bandstands and green folders all have a connection

February 25, 2019
This week, I have some pictures for you from my phone's camera. I am going to try to find links between them. 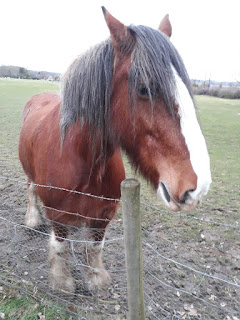 Okay, so let's start this photo-blog with this beauty. I don't know his name. I'll call him Horse because I'm original like that.

I visit Horse regularly. He lives in a field 15 minutes' walk away from my house. When I say 15 minutes' walk, I'm the one who walks to Horse, not Horse to me. I plug in my earphones, select a radio programme, and say to my husband, 'Going up the road to see Horse.'

Horse listens to any problems you have and gives wise, merciful looks. He is cheaper than any other therapist. He does not judge. And you can trust him not to gossip. All he asks in payment is that you stroke him and feed him clumps of grass, which I call a bargain. 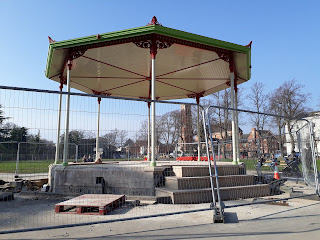 This is the bandstand in Leamington Spa's Pump Room Gardens, near my home, and it's currently being restored to its original loveliness by a company specialising in this kind of restoration work.

The old one had definitely seen its best days and, to be honest, had become a haunt for local teenagers, some homeless people, and some who had imbibed substances of various kinds, and I don't mean Haribo. When I taught at a local state school a few years ago, the teenagers used to call it The Banny. 'Meet you down the Banny tonight?' 'You going down the Banny?' It was rather reductive as a name and might as well have been a lamp post or a wall. I'm not sure they were as fascinated by the Georgian elegance of the bandstand as they were by the prospect of lurking about looking suspicious.

You may be interested in the video about the restoration of the bandstand if you like that sort of thing. I found it strangely alluring - all that machinery and maleness and metalwork. Very D H Lawrence. Ha! There's my link with the first picture..I seem to remember, although I can't recall which novel it's in, D H Lawrence writing in a very erotically-charged way about a woman riding a horse. I doubt it was a Horse-type horse. More likely a sweating stallion. Anyway, here's the video. 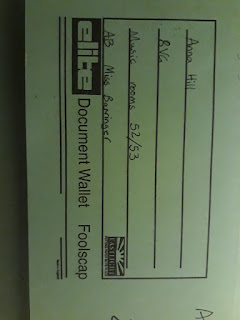 I found this folder the other day. It belonged to our daughter when she was 12. She used it for her music work at school.

She's 29 this year, and next month is moving permanently to Japan. Don't cry for me, Argentina, but if your name's not Argentina, feel free.

She did Japanese Studies at Sheffield University. One of those years was based at Hiroshima University in Japan. Then she worked for two years for an airline I won't name as cabin crew, flying all over the world, but often between London and Tokyo. She soon found that it wasn't her thing at all, wearing compulsory make-up and heels, and dealing with belligerent passengers. She escaped when offered a job working for the Tokyo Stock Exchange at their London office as an admin assistant/researcher. She has been there for several years now, working solely with Japanese colleagues, and they have offered her a job in Tokyo. She has recently completed an MA in Translation Studies so she's going into the translation department over there.

She promises to return once a year, probably during the Tokyo summer when residents are slick with humidity and sweat and the pollution is at its worst.

And I guess there's always Skype :(

What's she looking forward to? Probably the karaoke! She has a fabulous singing voice and loves the way they do karaoke in Japan - not in pubs with a drunk not-singer on the microphone, but in karaoke bars where you hire a room with your friends and have your own personal karaoke evening social event.

So, how can I link that picture with the other two? Let's say that I have an affection for Horse, for the bandstand, and for green folders and all other stationery  my younger daughter. Soon, though, Horse and the bandstand will be the only two I can see regularly.

me at home; me out and about;