I leaned on the fence of a nearby field recently and gazed at the flock owned by a local farmer. I told them how cute they were, with their woolly coats and soft black noses, and how glad I was to be there, watching them nibble grass. I was sure the farmer didn't have time to pay them such close attention and I knew they'd be grateful.

I explained how sheep were my favourite animals and how much I'd like to hug them, telling them about when I cuddled a fat woolly-woolly sheep once at a wildlife centre and would have married it had this been socially acceptable.

I told them how sure I was that my visit to them and my obvious admiration would boost their self-esteem and make them feel proud to be part of the ovine community.

One sheep wandered nearer the fence and I felt privileged that it had come closer, clearly uplifted by my presence and wanting to hear more. I fished my phone out to take its picture.

Here it is, hanging on my every word. 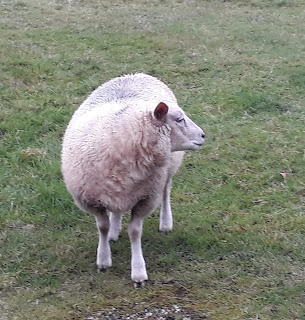 Hm. Perhaps not so fascinated.

It's particularly galling to be ignored by a sheep. They're not exactly Michael McIntyre themselves when it comes to offering entertainment or sparkling repartee.

Not that I'm bitter, or anything.


'What are your greatest fears?' someone asked me the other day.

'I'm terrified that I might bore people,' I said. (I didn't add 'or sheep'. Not everyone would understand.)

It's true, though. If at a social gathering I see people's eyes wandering while I'm talking to them, I feel a bit sick. If I thought you were bored now with this blog post (although you probably wouldn't have got to this point if that were the case) I would be ashamed.

And in my work as an English teacher, if a student ever says they're bored in my lesson, it takes me months to get over it.

I was teaching a lesson at an independent boys' school once where the behaviour (mostly) was good and pupils were generally polite and mannered. As I spoke, though, one pupil suddenly stretched his arms into the air as if just waking up, yawned, and said, 'Oh, I'm so BORED!' The class guffawed and he opened his eyes wide, clearly horrified at what he'd done. 'Miss, I'm so sorry. I'm so sorry.' He couldn't stop apologising. He was one of the most respectful boys in the class and genuinely hadn't been conscious of saying it out loud.

I wasn't comforted to know that he had been SO bored that he'd been semi-comatose and not in control of his own speech organs.

The class never let him forget the incident. And I found it hard to erase it from my own memory too.

I know it's irrational. As a teacher, or a friend, or a blogger, or a sheep-conversationalist, one can't be hugely interesting and gripping all the time.

But I still worry about it.

Perhaps the reason I like talking to sheep is that they look pretty bored anyway so I can kid myself they think I'm an absorbing raconteur but that it won't reflect on their faces.

But the truth is probably more this ...


Blushing Me Me fears Me out and about