Reasons why Lanzarote may not welcome Fran back

Did you miss me? Sorry! I was away in Lanzarote.

Here I am, wearing a cardigan and trying to avoid sunlight. Because that's why people go to Lanzarote, obvs. 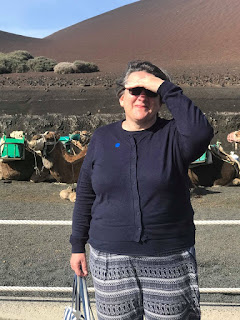 My sister invited me on the holiday. It was a lastminute.com kind of arrangement and I had about a week's notice. Had I been still working as a schoolteacher, I'd have been forced to say no. But I'm working from home at the moment - tutoring and writing and pretending to clean the kitchen properly - so, I was free to go.

I wasn't sure she'd picked the right person for her companion. 'You do realise there are reasons I never go on holiday to hot countries?' I said to her. 'I don't do sun. I rarely do outside, frankly. That's why Paul and I head off to Whitby in Yorkshire each summer, where we know it will rain and we can safely wear anoraks with the hoods up.'

She promised Lanzarote would only be 21 degrees at the end of January and I was guaranteed cardigan wearage at least some of the time.

She'll never make a weather forecaster. It turned out to be 24 degrees most days and if I'd sat in the sun for long, I'd have been braised in my own juices.

She wanted sun. I wanted shade.

We compromised, in the end. For most of the week, we sat in our favourite outdoor cocktail bar at the hotel and read books. My sister found a table in direct sunlight and let it braise her. I sat at a different table, in the shade, and yelled, 'Woo hoo!' if I wanted to suggest we try a Pina Colada next, or that we should wander down to gaze at the Atlantic and catch the gentle breeze that came off the sea and took down my body temperature a few notches until I was only on simmer.

In the photo above, you may have noticed that I have a blue sticker stuck to my cardigan. This was because we were on a tour of the island and the lady in charge of the bus jammed one unceremoniously on each of our chests as we boarded. 'This is to show that you are ONE OF MINE,' she boomed, which I thought overly proprietorial, considering we'd only just met.

You may also have noticed the camels. A camel ride was part of the tour.

My sister declined but said, 'You go. Go on.'

This is what I'd have had to ride in. 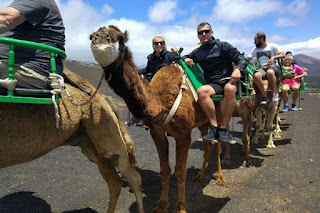 You're probably braver than I am and have done a squillion camel rides but, in case you haven't, I'll tell you that it's a double seat that straddles the camel's hump so that one person perches each side.

'What if they pair me up with someone really thin?' I said to my sister, 'or a child? And what if the camel ends up leaning to one side as though it's had a stroke? What if it DOES have a stroke? Or falls over and then the rest of the camel train collapses like dominoes into a volcanic chasm?'

We went to see the camel museum instead while everyone else risked it.

While there, I sent my older daughter a WhatsApp message and a photo saying, 'Look! Camels!'

'Please tell me you're going to ride on one,' she replied.

You can tell, can't you, that she knows me very well?

Other things I didn't do in Lanzarote included wearing this. 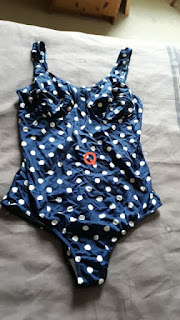 (Excuse the red circle around waist level. I think this is a screenshot of the photograph struggling to download.)

I found this swimming costume screwed up in a suitcase I haven't opened since the 1980s. I wasn't even sure I still had it. It's not been worn since my children were small, in my pre-teaching days.

I don't go swimming locally as I can't think of anything worse than hearing 'All right, Miss?!' yelled by teenagers from the other end of the pool as I teeter on the edge, a disturbing vision in polka dots, varicose veins and pie-thighs.

I took the costume to Lanzarote in case I had more courage there, but one glance at all the bodies on the sun loungers - some large and generous, yes, but all bronzed, shaved, depilated, sunlotion-gleamy and maybe tummy-tucked and buttock-lifted - and I vowed I wouldn't let any more flesh fall out of my cardigan than was strictly necessary.


We saw this sign at Gatwick Airport on the way to the holiday. 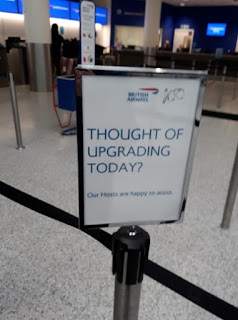 Underneath 'Thought of Upgrading Today?' it says 'Our Hosts are Happy to Assist.'

I wanted to go up to the desk and ask a host, 'Could you upgrade me to an Angelina Jolie body and a Julia Roberts face? I'm going to Lanzarote and I'd rather not go as myself.'

But my sister held me back.