May 03, 2020
So, the Prime Minister has called his (already mop-haired) new son Wilfred.

Sorry, Boris, but that name is taken. I think you'll find this is Wilfred. 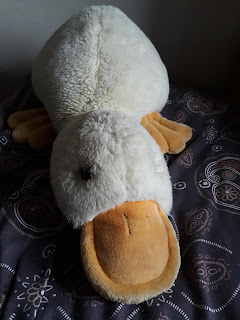 I quite understand, Mr Johnson, if you decide to change your little boy's name in the light of my photograph. It can't be easy, realising you've named your son after a giant stuffed duck with a preternaturally enormous beak.

How about something more modern, anyway? Jake? Kyle? Connor?

Horace, to rhyme with your own name?

Or, as these are more enlightened times - Doris?

Readers, while the Prime Minister ponders over my suggestions and looks up my number so he can ring me to discuss the options, I will tell you instead the story of how this toy duck became known as Wilfred.

My grandfather was called Wilfred and my grandmother Kathleen. The day before their 50th wedding anniversary - some time in the mid-1990s - I said to my husband, 'I am going to town to buy a Golden Wedding present for Gran and Grandad.'

Two hours later, I came back with Wilfred, although he hadn't been named at that point.

'What is that?' my husband said, peering into the carrier bag. 'Where is the anniversary present? Why are you buying soft toys? Why did I ever agree to marry you? Why didn't I marry Doreen when I had the chance for a peaceful life?'

He was not convinced at all by my arguments that a) a yellow duck was a perfect present for a golden wedding and that b) decorative wall-plates - the only other thing I'd seen that would have suited - were so tedious, they almost counted as an insult, as though you were commiserating, not congratulating.

This is why Wilfred became a permanent fixture in our household - our three children were not as unhappy about this as their father was - and it also explains why he was named so.

It's also why I was sent out again, unceremoniously, to buy my grandparents a wall-plate.

Yes, they did love it, but only because they hadn't seen Wilfred the duck.

Or maybe they were just being polite and the other sixty-three wall plates were hidden under the sofa.

Wilfred - shortened to Wilf now that it's only the two of us in the house and we're old enough now to be conserving breath at all opportunities - has been with us for 25 years. He's a favourite of the grandchildren's. When they come for a sleepover, Phoebe (6) claims him straight away.

I've just said to my husband, 'I'm writing about Wilf the duck. Do you remember why we have him?'

You know when a shadow crosses someone's face, as though they've been emotionally scarred by a trauma and still react at even the slightest memory?....

Boris still hasn't rung. A bit rude, when I'm only trying to help.


Me at home Me memories Me opinions