Reasons why Fran's mornings can be fraught

May 14, 2020
Let's talk breakfast.
I have one Weetabix to start the day. That sounds like an innocuous statement describing a simple process, doesn't it. What could go wrong?
But that's not why you read this blog, is it, to find out what hasn't gone wrong?
Plenty can go awry with Weetabix.
First, I've never yet managed to extract a Weetabix biscuit from its paper packet without spraying wheat all over the kitchen counter. I've eaten Weetabix since I was a child. The paper packets containing 12 Weetabix were badly designed then, and they are now. I suspect that the same person has been in charge of 'Packaging' all that time. He's now 103, some kindly, frail war hero with a leg brace whom management don't have the heart to fire.
Well, compassion is all very well, and God Save the Queen and all that, and hurrah for Chelsea pensioners, but what about my ruined morning?
'It's like a Tarantino movie with crumbs,' I said to my husband, sweeping a third of a Weetabix up with a cloth from behind the toaster, around the kettle, and scattered across the surface.
'Oh, right?' he said. This is what he says when he doesn't know the cultural reference and won't admit it.
I didn't push it. If I'd accused him of having restricted cultural capital, he'd have started talking in horticulture, tossing around Latin names and listing varieties of dahlia.
'I've only got two-thirds of my Weetabix left now,' I said, looking glumly into the bowl.
What didn't help was that I like to eat my breakfast in a large, deep bowl, specifically this one. 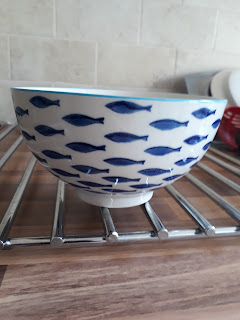 And that's fine if you're having a generous portion of Shreddies, or a healthy, plentiful mix of yogurt, dried fruit, and muesli.
But my Weetabix ration - now two-thirds of a biscuit - looked pathetic compared to the size of the bowl, a bit like I would if I stood in the middle of the Grand Canyon.
'Have two, then,' my husband said, as casual as though it didn't matter.
HAVE TWO?
HAVE TWO?
This is the problem. He doesn't understand. He's as thin as a bootlace and even more so since lock down started and he began to cycle everywhere rather than take the bus. Also, as a gardener, he could breakfast on 12 Weetabix laced with whipped cream if he wanted to and still not put on weight.
He actually has fried eggs on thick buttered toast for his breakfast. And I hope it cho Which he really enjoys.
'This'll have to do,' I said, peering down into the chasm where my partial-Weetabix lay. 'If I have two, I'll go into might-as-well-be-hung-for-a-sheep-as-for-a-lamb mode and have a packet of chocolate fingers for lunch.'
I sighed and opened the fridge to get the milk. I unscrewed the carton and poured. A thimbleful dripped out, dampening the surface of the Weetabix, but unwillingly, unhelpfully so, as though in league with the man with the leg brace.
'Dammit,' I said.
'You might have to open a new one,' my husband said. 'That carton was just about to run out.'
He's helpful like that. But I didn't comment on it. I've commented 380,909,372 times since we've been married and Comment #380,909,373 wasn't going to make any difference.
It took me three seconds to eat my Weetabix. While I did so, I watched tiny birds out of the kitchen window, poking their beaks into the bird feeder. They're messy eaters and seeds scatter all over the path below.
I swear one looked my way as if to say, 'You've got more in common with a tit than you think.'
BOOK NEWS!
In other news, my new book comes out in seven sleeps from now! Look at this lovely banner (below) that the publishers designed for me. If you want to join in with my lock down style book launch party on Facebook Live (and I'd love you to come) click this link at 8.30pm (UK time) next Thursday 21 May for fun, entertainment and a chance to win a free copy by writing a schooldays haiku!  https://www.facebook.com/events/263230455056350/  You might need to 'refresh' the page when you get there.
If you can't get along but would like to read the book, it's in most online bookstores but here's the Amazon link for starters. Hope you enjoy it!
me and food Me at home