Evidence that Fran is wrestling with some big questions

She's a female wrestler (real name Jayne Porter) whose career began in the 1970s when she was only 14. Here she is in action. (She's the one using the other woman as a seat.) 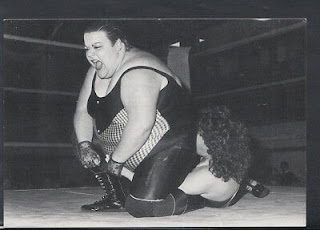 Her final fight in 2011 was against another female wrestler, her daughter, Connie Steele! Connie still fights today.

Here's Connie, not in action, unless she has her foot on the face of an opponent but that wasn't included in the shot. 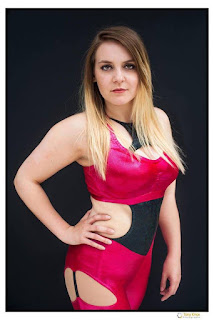 Why am I mentioning Klondyke Kate today?

No, I'm not thinking of a career change.

No, I would NOT look good in a sparkly leotard. Imagine!

Not even WITH the lights low, thank you.

No, the reason she's on my mind is that I often use a 1992 newspaper article about Klondyke Kate with my English students. It's a great example of a 'profile piece' and helps them with description skills. I read it with a student this morning in our Zoom lesson.

The article in question, by Liza Cody the fiction writer, explains how Klondyke Kate is one person in the wrestling ring and another person outside of it. In the ring, she is the villain, talking dirty, acting aggressively and yelling insults back at audience members who, likewise, yell back wildly, red in the face and waving their fists.

She leans over the ropes of the ring and shouts, 'What are you lot looking at? Eh? Eh?'

'My arse is prettier than your face!' one man screams at her.

'Come up and show us,' she screams back.


However, at the end of the show, the wrestler signs autographs, chats to punters, talks about wanting to get home to her young son and, extraordinarily, is revealed to have the tiniest little hands on which she wears children's gloves.

This 'dual personality' isn't restricted to the wrestler, though. The audience members at wrestling matches behave in ways they wouldn't outside of that context.

The difference is that Klondyke Kate's alter ego is all part of an act. It's a performance for the customers, who expect her to be villainous and ugly and aggressive. It's her wrestler persona. As soon as she's out of the ring, she drops it.

But the audience members aren't acting.

What's happening, then? Are they revealing parts of their characters which they suppress in the real world of their lives and workplaces and Sunday teas?

I've seen this for myself, because my own gran took me to wrestling matches at the Royal Spa Centre in Leamington when I was young. In the 1970s, we watched Giant Haystacks annihilate Big Daddy or Mick McManus and my gran, usually quiet, shy, respectful and conscious of what others thought of her, transformed into some yelling, swearing BEAST of a grandmother who waved her handbag and screeched, 'Get him in the goolies! Get him in the sodding goolies!'

I was in awe. It was as though she'd taken some magic potion from a kind of reverse fairy godmother who turned you into an Ugly Sister.

When the wrestling match had ended, Granny would become Granny again, for which I was hugely grateful, considering we still had a journey home on the bus to navigate.

I wish I'd studied psychology. It fascinates me, this capacity of humans to change into other types of people in certain contexts or to let parts of their personalities escape.

Look at what happens to people in their cars, for instance. Usually mild-mannered people can become raging, cursing, accusatory monsters, jabbing their middle fingers at cyclists or stuttery old ladies who hog the middle lanes.

Do we, in our cars, think we become anonymous, a bit like people are who sit behind their Twitter profiles, tossing their purple-nosed opinions into the Twittersphere and saying things they would never say to anyone's faces?

I've heard people say that this is what alcohol does for people: gives them the permission on Friday nights to release the behaviours they manage to submerge in their factories and offices and front rooms.

I wish I'd studied psychology. I'm sure if I had I could explore this phenomenon in a more informed and intelligent way, rather than lobbing it all into a blog post, using you poor people as my guinea pigs.

Incidentally, Klondyke Kate had a gastric bypass after she'd retired and no longer needed to flatten anyone. She lost 14 of her 28 stone and became a foster carer in Weymouth.