The post box on the corner of my street has been out of use for months. It's encased in black and yellow sticky tape that makes it look like a crime scene. This may well be the case. Perhaps some bored youth popped a lit match in there as his contribution to the wellbeing of his local community.

Whatever the reason, the Royal Mail seem to have decided not to reinstate it and that means that if I want to post a letter or small parcel, I can't just shuffle down our small street in my slippers without my upper lip plucked. I have to don shoes, a jacket and some pretence of respectability for the ten-minute trek up the hill to the local shopping arcade where the next nearest post box is.

My efforts are nothing compared to those my gran would have gone to. Her corner shop was only a few doors down yet she still applied perfect lipstick, her best coat and a fresh headscarf merely to fetch a tub of Blue Band margarine or a tin of peaches.

But she swore blind that if she appeared out of doors without lipstick and a headscarf, she'd be 'looked down on'. 'I don't want to be like Mrs Brown, at the shop with her curlers in and a fag in her gob.'

Here's my gran, being visited at her care home by yours truly with the grandchildren. She died three years ago in her 90s. 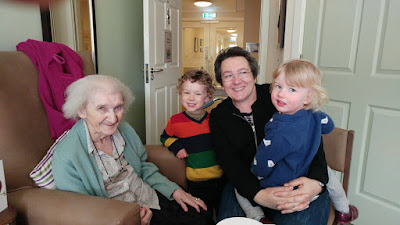 We've lived on our particular street for 12 years now and had become used to the convenience of our post box. Admittedly, though, we've used the traditional mail less and less over that time - technology has a lot to answer for - and that may be why Royal Mail aren't bothering with it.

I don't mean to imply that it was solely our custom that kept it in use although it's worth the speculation ...

'What about the post box near Albert Street? Shall we put that one back in service, boss?'

'Isn't that the one near that woman's house? The one in the slippers with the tache?'

'Yes, that's her. Thinks no one can see her, beetling to the post box at dawn with marmalade on her chin.'

'She hardly uses it these days. Perhaps once a fortnight. It used to be weekly or more but I bet she's using email now like everyone else.'

'Ah, let's not bother then. Let her spruce herself up and puff up the hill to the next one. That'll learn her.'

Typically, just as my local post box gets decommissioned, I've begun to use the mail more. For one thing, I'm posting out copies of my book 'Miss, What Does Incomprehensible Mean?' to people who want a signed copy. So, that makes it feel more worthwhile, hauling my carcass up to the post box.

Since you ask, £10 within the UK including P & P and a free bookmark. It's a funny memoir in diary form based on a typical year in my life as a teacher. Check out its reviews on Amazon. 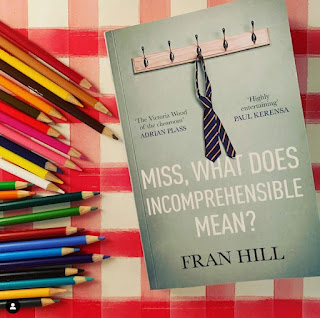 Also, I received an Actual Letter from someone earlier in the week. Someone I know had passed on my book to her as she'd been his English teacher when he was at school in the 70s and he thought she'd enjoy it. She did, and wrote to me, on proper paper, with a real pen, in that lovely copperplate script still used by some in their 80s and 90s.

Does anyone else get unreasonably excited at the sight of a hand-addressed envelope on the doormat?

I took another trip to the post box yesterday, therefore, to post her a reply. I'd foraged in a drawer for respectable writing paper and tried very, very hard with my handwriting, biting my lip with the effort like a five year old practising curly c and kicking k.

I sighed with regret, passing the decommissioned post box, and heifered my way uphill to the further one, all traces of marmalade wiped off the chin beforehand.

I probably overdo the celebrations when I reach the postbox. 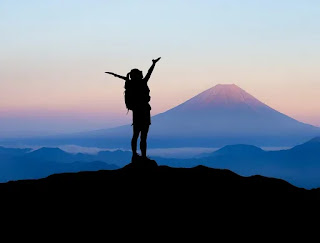