Showing posts from August, 2012
Show All

Thoughts about breakfasts in guest houses

Evidence that even familiar, cosy little nursery rhymes can be mangled to perdition 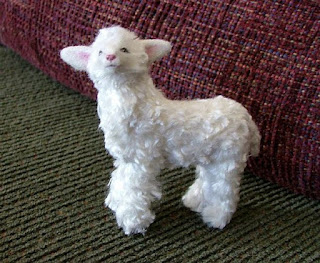 I'm in the mood for a bit of silliness.  You are the unfortunate recipients of it.  I apologise in advance. 1. Mary had a little lamb. The midwife had a fit. She, thinking it would be a child, Had not expected it. She glanced at Mary, wondering, If Mary had a clue That instead of having a mini-me She'd had a mini-ewe? 2. Mary had a little lamb. Her husband paled with shock. He'd always wanted kids, But was less sure about a flock. 3. Mary had a little lamb. She had it with mint sauce. And, contrary to what you'd think, Felt nothing of remorse. The following day, however, She died of gas formation. The moral?  Better stick to Everybody's expectation. 4. Mary had a little lamb. Oh, where should I begin, To tell the tragic story Of what she did to him? For, though, it was now little, Once , massive it had been. Until she'd washed poor Lambsy On the very fastest spin. Lambsy, shrunken and misshapen, all because
29 comments
Read more 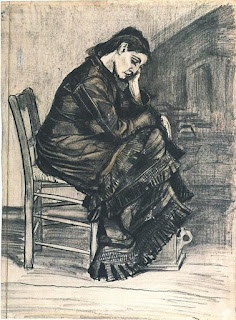 Yesterday, I competed in a local poetry slam in Leamington.  I reached the semi-finals, but didn't win. S.L.A.M = She. Lost. And. Mourned. The winner was another local poet, Craig Lambert, and I liked this poem he performed so much I asked him if I could post it here.  He said no, so I hit him with my handbag, poured a drink over his head, then pulled his chair away just as he was going to sit in it so that he landed on the floor in a heap.  Then he gave in.     The poem's about how contradictory so many proverbs and sayings are in terms of the advice they give.  I like its linguistic angle on daily life and its humour.  Thanks, Craig, for giving in, and I'm sorry about the bruises. Wise Words You can't teach an old dog new tricks, but it's never to late to learn; so while your neighbour turns the other cheek, as his incontinent spaniel craps on your lawn; tell him you're simply adhering to the principle of an eye for an eye as you jab his
20 comments
Read more 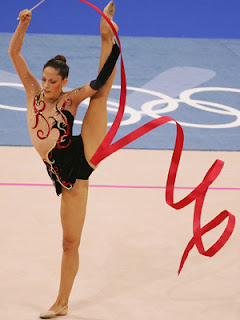 The 21-year old and I have been watching the Rhythmic Gymnastics in which female gymnasts perform on the floor with various bits of apparatus including a ribbon a hoop a ball some clubs We think this looks dead easy.  Anyone can mess around and do a few jumps with a hoop.  We'd like to see a little more challenge introduced so want to suggest some alternative types of apparatus and I'm sending a copy of this blog post to the Olympic Committee so they can make the necessary adjustments to the next Olympic programme. a ferret a small child spaghetti a Wellington boot A medium-sized truck all the ministers in the coalition Cabinet
24 comments
Read more 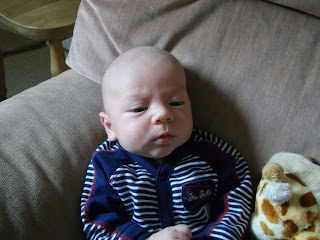 A day with my 21 year old daughter who's home for the summer before starting her new job in September. Me:        [writing another article for the TES to add to previous articles I've written for them and doing     research the lazy way]  Hey, Daughter, what was the name of the 1970s band who did that song?  You know, the one about Christmas and everybody's having fun. Her:       [doesn't even have to think about it] Slade. Me:        Oh, thanks.   [Inserts reference into article.] Pause. Her:       There is no way, Mum, that should have been me who knew that and not you. This just exemplifies what is happening to my memory.  I think it's to do with my age.  I looked up the blog of someone called Perry Menopause, and he says that around this time, once you hit 50, your memory can deteriorate quite ... quite ... in fact, I can't recall exactly what Perry said, but I'm sure it explained everything. Just after my grandchild was born a month ago, I
33 comments
Read more 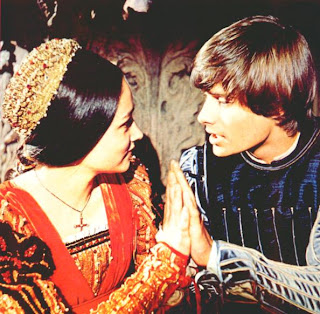 What would some classic books have been like had the writers got a bit fed up of the main characters and just edited them out?  To be honest, I quite like the sound of some of these plot lines. In 1930s America, mice and rabbits get on with their lives in peace. Voldemort wears a puzzled expression. Boat for sale, suitable for three or more men, and dog (optional), unused. Sancho Panza finds himself the unexpected star of various adventures. Various corpses get to keep their body parts. Rochester stares moodily into the fire a lot more. Ishmael ends up fishing for skipjack tuna. In the absence of a crazed doctor to use them for transformational purposes, someone uses the salts for their chips. A rye field lies undisturbed. A late 19th century portrait painter, without a cocky young rake to paint, embarks on a still life of some fruit. Women in Whitby find other uses for garlic. Various horses find their own way to Canterbury, un-entertained by lewd stories.
9 comments
Read more 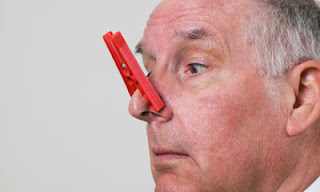 I don't know if any of you guys are people who have to watch what you eat, either from a dairy-free or gluten-free perspective, but if you are, you might find my sister's ideas and recipes helpful as well as entertaining.  She's a very experienced nutritional therapist but her websites have a fairly informal, chatty approach to them which her readers really like.  Browse her sites for more information.   This recipe for stinky liver pate (my name for it, not hers) advocates cooking with a peg on your nose.  As I've written in my comment on the recipe, she should make a TV series. Evidence that my sister and I share the same silly sense of humour Ronald was preparing to make Micki's latest recipe  and was following her instructions to the letter.
14 comments
Read more

Yet more evidence that Fran and Outdoors are not best friends 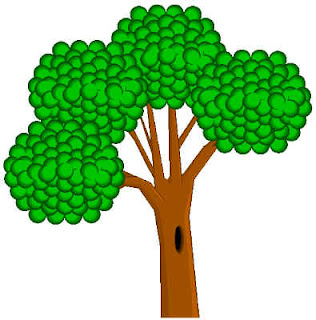 I have problems with wind. No, this isn't an intimate confession about digestive disorders.  I write those on my other blog 'Intimate Confessions about My Digestive Disorders' which, oddly, doesn't seem to be getting a lot of readers, along with its sister blogs 'Descriptions of my Warty Growths' and 'Adventures with Toenail Clippings'. No, by 'wind', I mean the blowy stuff. Here's a proper dictionary definition, in case you felt my definition 'the blowy stuff' lacked some precision. Wind : air in natural motion, as that moving horizontally at any velocity along the earth's surface.   Air?  Motion?  Moving horizontally?  Velocity?  Along?  The words themselves make me suspicious.  There is far, far too much movement involved there. If someone offered me a 'day out in windy weather' and someone else offered me 'a day cleaning hairs out of other people's plugholes' I would take the latter and be truly
13 comments
Read more
More posts