Showing posts from December, 2019
Show All

Evidence that not all Santa's gifts are welcome 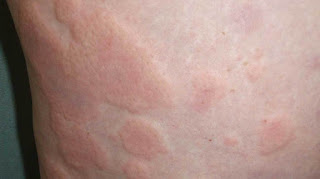 Dear Santa Claus Thank you so much for the early Christmas present. Although a body covered in hives wasn't top of my wish list and neither did it substitute for the Sean Bean duvet cover I asked for, it made for an original gift. You delivered the rash on 7 December, completely unexpectedly, and I'm still not sure of the cause. I can't say it was a particularly welcome gift. On the other hand, it did last an entire week, unlike most boxes of Milk Tray or bottles of pink gin would have. Also, it was one of those gifts that just keeps surprising its recipient. One minute it was mild and pink, like a pair of soft ladies' pyjamas, say, and the next, it was furious and festering, like the inside of a volcano. But who wants Christmas gifts with only one facet to them? It being an early gift, I hope you don't mind that I hid it from the general public as far as I could. When it crept up to my neck, for example, I swathed myself in a scarf I could have wrapped ar
20 comments
Read more
More posts