Showing posts from April, 2017
Show All

Reasons why Fran will never take her husband to the Caribbean

My husband had his first ever cocktail today when we were in a Caribbean restaurant in Birmingham called Turtle Bay. He's left that rite of passage late, being 61 next birthday. But he's always said cocktails were too sweet and more of a woman's drink.

If it's 2 for 1, he'll fall for it. He's Bargain Man. He'll buy fourteen pounds of broccoli from a market stall just because he can and for the next week it's broccoli in everything. Take it from me, one can have too much broccoli jam and I've little good to say about the homemade icecream.

But, cocktails a woman's drink, huh?

So, how come, after one concoction of rum, lime juice and ginger beer called a Jamaican Mule, did he grab the waiter by his apron strings and demand an immediate refill within thirty seconds or he'd want to see the manager?

I was a tad worried. He gets chatty after even one beer and, being a gardener, …
19 comments
Read more

A sonnet in honour of chocolate

As it's Shakespeare's birthday today, and Easter is still in our minds, I thought I'd post a sonnet I wrote in honour of chocolate, and celebrate both at once.

A shout-out to Elizabeth Barrett-Browning, too. HI, ELIZABETH!

Anyway, sonnet and chocolate nearly rhyme, so it makes sense to put them together.

How do I love you? Let me count the ways.
I love you when you're cast in bunny shape
or in a simple slab from Sainsburays
or from the fridge, or melted, or in cake.

I love a Minstrel cool upon my palm.
I love a Cadburys button on my tongue.
I find it hard to stop - you have such charm -
before I know it, I've had twenty-one.

I love you whether white or Swiss or Belgian.
I want you to myself. I do not share.
I'll eat you 'til my little belly's bulging
and I can barely get up from my chair.

Oh, chocolate! I'll love you 'til I die
(though when I do, you'll be the reason why).

Reasons why Fran is playing more children's games these days 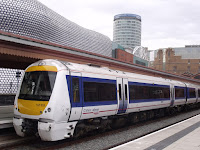 A month ago, to see my grandchildren, I had to go on one of these all the way from Leamington to Richmond in South-west London.


Now that they have moved to within ten minutes' walk of our house in Leamington, I just have to go on one of these.

Correction. Two of these.


Correction: The legs above were my dream legs, not my real legs.


Correction: These aren't my real legs either. They're someone else's. For my legs, think, 'Somewhere between Picture 2 and Picture 3.'

It's taking some getting used to, knowing that just by putting one leg in front of another (never my favourite activity) I can be at my son's house, playing Snap or Snakes and Ladders with a 3 year old and a 4 year old, or watching a Peppa Pig DVD, or answering a litany of questions from a curious Elijah, who's just started school and wants to know the answer to Every Awkward Question Ever.
I took them both to see their Great-Great-Granny in her care home. She's my mother's m…
18 comments
Read more
More posts