Showing posts from February, 2010
Show All

February 28, 2010
On the other hand, perhaps I'm wrong, and it's not that some famous novelists hyped up their stories too much as I suggested in my recent post in which I dumbed-down novel titles . Perhaps novelists have, in fact, been over-cautious.  Maybe some classic literature would be improved if the authors had just pushed the limits a little and not been so circumspect...... Louisa May Alcott might have written  Great Big Humungous Women, in which a genteel 19th century American family reacts to the pressures of life with Marmee and life without Dardee by slathering Nutella onto enormous pieces of cornbread, making the search for contentedness in family life somewhat more difficult, particularly when the budgeting for dress material gets tricky.  When one of the four daughters gets a terminal illness, there are unseemly fights over who gets her portion, and Marmee becomes distressed, particularly as, when a wealthy neighbour offers them a Christmas feast, the girls are too stuffed to
18 comments
Read more 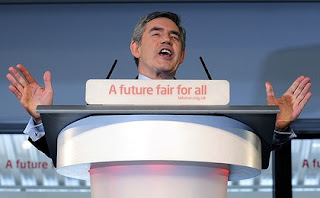 Why I should be more tactful when making fun of names

February 15, 2010
Yikes!  I've lost a follower, straight after writing my new Valentine poems.  Was it someone called Valentine?  I'm sorry, Val, I'm sorry ..... it's not really a stupid name, honest. How do I find out who went off me?  Anyone know?
14 comments
Read more

Five things I learned at the shops today

February 15, 2010
1. Shopping for jeans then having scampi, chips, peas and French bread with a pint of Diet Coke afterwards is a good plan.  Having scampi, chips, peas and French bread with a pint of Diet Coke then shopping for jeans is a less good plan.  I'll say no more about this, other than, I own no more jeans than I did yesterday, but I do have happy memories of some of the best chips in town.  I also have an extra kilo on each thigh, a free gift which came with the chips. 2. If you're looking to buy a trendy jacket for work, let me tell you that big flappy collars the size of schooner sails are in.  What's more, they are in on little bitty jackets which only reach to just below your waist.  Effectively, there is enough material in each of the collars to make three more of the jackets plus a matching A-line skirt.  When the spring breezes blow up, your bum will be freezing cold, but your shoulders will be as sweaty as a wrestler's armpit. 3. Trying on waterproof padded jackets
14 comments
Read more

Evidence that I am really a true romantic

How I know I must be in labour

February 08, 2010
Just checking out a fellow blogger's baby experiences and a big advert pops up with great big letters asking me, 'ARE YOU IN LABOUR?' Well .... I wasn't expecting to be, and I'm 48 next birthday, and certain surgical procedures have been undertaken that we were assured were usually permanent ... but I guess it's POSSible. So, maybe I AM. Hang on!  But that means .... Oh, gosh, I'm so reLIEVED.  This explains EVERything ..... The gradually increasing waistline (now I don't feel so bad about that elastic giving way and pinging into the face of the lady on the bus). The feeling that I need to lie down in a bed most of the day (now I can tell my boss that there is a REASON I need to teach from a supine position). The flutterings in the tummy I keep thinking are hunger (now I know there's a baby in there needing food, I can have three cakes instead of two). The mood swings (now I can carry on moving from 'I feel great&#
24 comments
Read more

February 05, 2010
An appropriate name for a handy form of poetry which you can write but still have lots of time for doing other things because it only consists of two words  Terse Verse What I do after six hours in town desperately searching for an original present for a male relative and have lost the will to live and no longer care that it's what everyone else will get him, too Buy Tie The result of spending too much time eating chocolates and cakes and biscuits and puddings and not enough time working out in the gym Bigger Figure What I got when I accidentally put my sleeping tablets in Rover’s food bowl instead of worming tablets Groggy Doggy A description of the feelings of a pet bird when its cage door has been left slightly open by mistake and the family cat is approaching Wary Canary A poem about a guy who sits in the corner of the pub drinking only lemonade but insists on repeating funny stories everyone has heard before Anecdotal Teetotal The most difficult thing to be do
25 comments
Read more
More posts