March 15, 2010
Just in case you're Across the Pond, here's the definition of a British queue:

a long, long line, often found in supermarkets or banks or post offices or public toilets, of people who are outwardly patient ('No, no, of course, you first, go ahead, you were here before me, yes, yes, of course I don't mind') but inwardly seething ('you dare go ahead even though I've said you can or I'll batter you to death with this frozen lamb joint I just bought').

Of course, you also find queues at bus stops.


Here's a picture of a bus to celebrate two things: 1) Another bus post after a bus-less few weeks and 2) the fact that I now know how to include pictures. 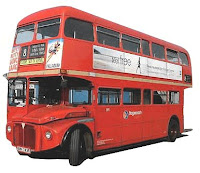 So, here's the story.  There's me and Husband, heading for the bus stop to go shopping last Saturday.  I'm wearing my normal Saturday wear: plunge neckline gold sequinned ballgown, pearls and a fur wrap, and he's in his usual garb of cordorouy trousers, old coat and -
Sorry, I need to take a short break before I can bring myself to say this.  In fact, I'm not even going to say it.  I'm going to find a picture of one .... 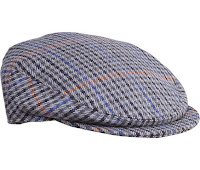 And just to prove that my computer obviously feels just the same way as I do about the Husband wearing a c*p, even though he is only in his early 50s, this is the nearest to the picture of the c*p it would allow me to type.  I tried to type right underneath it, to the right of it, but, no.  I had to leave a great big g*p under the c*p.

Here is a picture of

no, not the Husband, but what it does demonstrate is what wearing tweed flat c*ps can do to a man.
Fortunately, it hasn't quite got that bad yet.  But (and you're probably wondering by now what all that queue stuff was about) it does GET YOU TO THE FRONT OF THE QUEUE.
But is this something for me to be happy about?  No, it is not.  I am only 47.  Granted, I lied about the ballgown and fur wrap, but last Saturday I looked as normal as a 47 year old can.  As in, not OLD.
And, yet, because I was with Fl*t C*p M*n, a girl of about fifteen, who should know better at her age than to show respect to her elders (what are things coming to?), gestured us onto the bus as though we were a couple of octogenarians.  I demurred.  She insisted.  I tried to get her to go in front.  She insisted again, her eye on the fl*t c*p.
'Right, that's it,' I sn*pped *t Fl*t C*p M*n when we got on the bus.  'Th*t's the l*st time I'm coming shopping with you on a S*turday if you're going to wear th*t Fl*t C*p.'
I know there's a first time for everything, and I know there are reasons why I have wrinkles, flabby bits and a bit of hip pain that had BETTER NOT BE ARTHRITIS.
But I don't want to be allowed on buses yet.  I want to take my proper place in the queue.
But what IS the proper place?  A bus queue is a strange and wonderful thing. In fact, it seems to be different from a supermarket.  People are less stressed (not having nearly slipped in a spill in the pickle aisle or had to control sweet-snatching babies).  They are more likely to respect the queue hierarchies and put up with it.  Or maybe they just pretend better.
(This is another blog post, really, but I'm just carrying on from the previous one to save paper.)
Bus queues form and then reform and then reform again, depending on who arrives.  The hierarchy is pretty set in stone.  It goes a bit like this.
10.01 Teenage girl at bus stop on own.
10.02. Couple arrives (woman looks quite young and sexy but man wears fl*t c*p).  Young girl steps back so couple now lead.
10.03 Older couple arrives (he wears fl*t c*p, she wears flowered sc*rf tied under the chin) so couple 1 moves back.  Older couple now lead.
10.03 Teenage girl with three young children, a buggy, a breastfeeding baby and a rabid dog arrive.  Everyone else moves back (quickly) so that she and family take the lead.
10.04  Young, healthy looking man but using crutches and with a plaster cast on his leg the size of an ice floe arrives.  He goes to the front and takes the lead.
10.05 Everyone has to move because someone in a wheelchair approaches.  There is a communal intake of breath, but the person in the wheelchair just wants to get past everyone.
10.10  That done, everyone re-forms into the previous hierarchy.
10.11  Another young, healthy looking man but in military uniform, on crutches and with a plaster cast on his leg the size of an ice floe arrives.  All the old people salute.  The buggy woman's kids stare and ask if he's a terrorist.  The buggy woman tells them to shut their gobs.  He moves to take the lead.
10.12  The bus comes into view and everyone shuffles into a line, preserving the order established.
10.12 + 3 seconds  A blind woman with a white stick approaches the bus stop.  There is general panic.  Everyone knows she NEEDS TO BE AT THE FRONT.  The whole queue shifts chaotically aside and slams itself into the hedge at the side of the pavement.  No one says a word.  (Why does this happen when blind people appear?  Why do we all stay silent and just move out of the way as if we weren't there?)  The blind woman tap taps her way to the bus stop.  Everyone re-forms, as quietly as possible, behind her.
10.12 + 10 seconds  The bus pulls up at the stop, only the driver stops so that the door is level with the BACK of the queue.

Aarrgghhh!
Still, the hierarchies MUST be preserved.
Result? 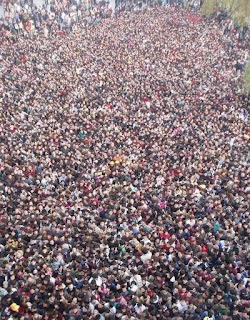 10.53  Bus leaves the stop.
One day, someone will turn up to the bus stop who is in military uniform, blind, with a plaster cast, a fl*t c*p, a flowered sc*rf, a rabid dog, three kids and a breastfeeding baby.
If they manage to sort that one out - even the British - I'll eat my h*t. Or, alternatively, I'll even agree to be seen out with Fl*t C*p M*n.

Blushing Me Me on the buses Me travelling