Evidence that I too can write about Nature.

Many of you fellow bloggers compose beautiful posts about trees or your cats or your horses or the plants in your garden, all of which enrich the souls of your readers.  You include photos, vibrant-coloured and demonstrating the startling beauty of the natural world.  You are true nature-lovers, and plebs like me, who think a long walk is going to the corner shop for a can of Pepsi, and who prefer libraries to lilacs and fish and chips to floral gardens, cannot hope to compete.

But I can at least try.  I'd hate you to think I had no appreciation of nature at all.


So here is an account of an encounter with the fascinating and uplifting world of nature which I had in Tenby.

The dead mice in the picture above are not actually the ones we saw in Tenby, but are a special type of mice called 'Miceus Googlus Imagus'.  They are, I have to be frank, very untidily arranged.

Unlike them, the dead mice we saw in Tenby were lined up, first one head up, second one tail up, third one head up, etc, economically, like boots in a shoebox, or like sardines in a tin only not in tomato sauce.

Regular readers will be relieved to know that we did not see these dead mice in the Tenby icecream shop, Tenby Library, or on a Tenby bus, but in a Tenby Reptile House we visited (oh yes, oh yes, we know how to party).

Here is a picture of some sardines in a tin, just to illustrate what I mean about the tidiness of the dead mice we saw.  Look at the picture, and try your hardest to think mice. 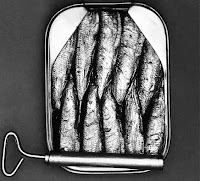 Yes, I know it's difficult, but you're just not trying hard enough.


Now, it's one thing to KNOW that reptiles are fed with dead mice.  It's another thing to see them arranged in rows on the top of the reptile's cage, conveniently at hand, as though they were just nice little pink cupcakes or peanut butter sandwiches cut into triangles.  It gave me a big shock, and took a hell of a lot of rum and raisin icecream to get over.

Dead mice as food, even tidied up, is one of those things you are aware of, but would prefer were kept quiet.


Other things I would prefer were kept quiet ....... (in case you don't recognise it, this is called a digression)

1. The 'basil between your teeth' thing when someone says at a social function, 'Do you realise that, for three hours now, you have had a bit of basil stuck in between your front teeth?'  It's not that I don't WANT to be told about the basil, but three hours after the meal, when I've been cracking (what I think are) my best jokes all evening, is not the time to find out.

2. The 'dessert on your shirt' thing  I once taught an after-lunch English lesson for an hour and ten minutes and it was only at the end of the lesson that the kids pointed out that, just below the first button of my white shirt, there was a giant blob of blackberry crumble and custard, stuck to my chest.  When I say 'was' I mean 'was' in the 'had been for the whole lesson' kind of 'was'.  No wonder they'd found my explanation of iambic pentameter so amusing.


Anyway, back to the mice.  I did wonder whether there was a seamless link I could make between the n-guh babies and the dead mice, but I'd better not.

Here is the picture of the mice again, just to get you back on track.


I've been to Reptile Houses many times before ('My name is Fran and I'm an iguanaholic ...') but I've never seen their mousey dinners laid out quite so explicitly before without so much as a warning sign.

And I think it just goes to show how much our world is changing.  I suppose, just as it's now acceptable for Britney Spears to appear on prime-time TV dressed in a belt, two earrings and some eyeliner, and just as it's now acceptable to sell a computer game to a child with more blood in it than a donor bank, dead mice in a neat row on the top of a boa constrictor's cage which give a middle-aged Englishwoman palpitations is fine.

Maybe it's just that modern reptiles are really demanding.  Just as the modern teenager wants microwave French Fries within minus 0.3 seconds, the modern iguana wants his McMice or KFM as soon as he's hungry.

Here's that picture again, just in case you haven't quite got the hang of it yet.

Ha ha!  Got you!
Me out and about Me travelling