March 30, 2011
Along with nature-loving followers who stay loyal despite my occasional posts about dead rats, using cat skins to clothe babies, and hating green fields, I now seem to have a few whose blog names are things like 'I adore making pretty cushions decorated with flowers' or 'Stencilling patterns onto textiles is my idea of ecstasy'.

I thought it was time to 'fess up, just in case any of these lovely people were expecting me, at some point, to post any pictures of my latest ventures into fashion design or velvet curtains.  I so hate to disappoint.

This little story may illustrate the extent of my skills in using a needle and thread of any sort.

When I was fourteen, we had to learn how to sew at school.  I use the terms 'learn' and 'sew' very loosely here, as you will discover.

Rather than starting off slowly with a handkerchief or a teatowel, as I was advised, I decided, being a pig-headed adolescent, I would make myself a pair of trousers.  As this was the early 1980s and flares were still kind of 'in', I cajoled the teacher into letting me have a suitable pattern, which she handed over reluctantly, and off I went.  Even the sewing machine made a little 'eek' noise as I approached it.  The signs weren't good.

I was a stubborn little tyke, and every time the teacher asked me if I needed any help, I refused.  I probably used words like, 'Bog off, you bum-faced old dragon'.  Who could blame her for going off to help Maisie Smith with the freckles and pigtails, who was making a pleated tartan skirt?

A few weeks later, my trousers were finished.  The only thing is, instead of looking like this .... 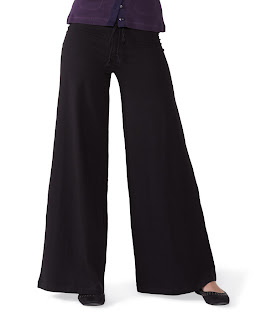 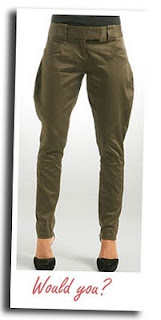 I'd sewn the legs on the wrong way up.

The caption under the jodphur picture is very apt, asking 'Would you?' The answer is, 'Well, no, not unless someone paid me in gold bullion', and so I never wore my handmade trousers.

The teacher requested that I be transferred from sewing to cookery.  Yes, an extreme reaction, but that might have been to do with the fact that I was a little sod who disrupted her lessons big-time, and not just because I was to sewing what Kate Moss is to the cream bun industry.

I was better at cooking than I was at sewing.  But that wasn't hard.
Blushing Me Me memories