But I still remember, even though it was so long ago, that the sweet and loving things one said about Baby in the daytime were often translated into something quite different at three o'clock in the morning .... 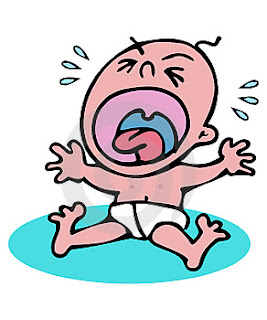 Nighttime: 'Darling, I can't stand Baby's noise any more.  Please bang some nails into the nursery window, otherwise I am afraid I will fling open the sash and cast Baby out into the dark night.'


Daytime: 'Right, that's his lunch done.  I'll just pop up and change his nappy just in case he gets nappy rash.'

Nighttime: 'Yes, I know his nappy's been on for seventeen hours now and weighs as much as a Tesco lorry.  If you DARE wake him up just to change him, I'll personally offer you to next door's rabid Alsatian.'


Daytime: 'Ah, listen to those little snuffly noises he makes when he's asleep.  Bless him!'

Nighttime: 'What do you mean, WHY have I put Baby in the shed for the night?  Dur!'


Daytime: 'Funny, isn't it, the way he keeps coming on and off the breast like that, as though he can't decide.  Silly boy!'

Nighttime: 'Right, that's your lot, sunshine.  Any more faffing about and you can go back and suck on your cot mattress while I put my Ipod headphones in on full blast.'


Daytime: 'I'll leave his babygro off for a while so his toesies can air.  How he LOVES to kick his chubby little legs around when his nappy's off.'

Nighttime: 'Yes, he IS rather drowsy and still, isn't he, darling, and being EVER so good while I change his nappy?  That'll be because he GULPED down his Mogadon and Mashed Banana at teatime.'
Me pretending to be a Mommy-blogger