March 25, 2012
The fact that my daughter sent me a teabag in my Mother's Day card ('I thought I'd buy you a drink, Mum') reminded me of the teabag knickers I made once.

My sister press-ganged me a few years ago into going to a 7 Days of Torture Holiday, otherwise called a week at a health spa.  It was in a hotel in Scotland.  Before I tell you about the teabag knickers, here are my main memories from the week.

1. Having a bath in peat will mean that you will be expelling peat from myriad orifices for weeks afterwards and will still have dried mud in your bellybutton a year later.

2. If you will insist on eating a lake of porridge first thing in the morning, in panic that the rest of the day will only involve mung beans, you can expect to feel uncomfortable lying face-down for a massage ten minutes later while someone pummels your back as though tenderising steak.

4. Going to a health spa with a sister who looks like you but is half the size is a bit like going around as your Before and After pictures.

5. Being wrapped in cling film for some therapy treatments makes you truly empathise with bacon in a way you never expected to.

When we had our sessions for the various therapies we usually had to take all our clothes off and were given a pair of these. 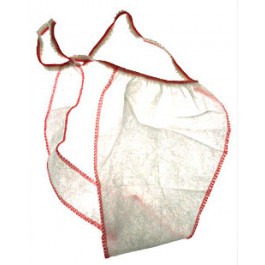 I took one look at them, then another look at the therapist, and thought, 'You're having a LARF!', then plucked up all my courage, resolved to do battle and protest, and said ...

Okay then, I'll put them on


the way you do when you are in an institution and daren't not conform.  What a loser.  All I could think of, while I was lying there, and she was slapping the Dead Sea combined with a paste made of cockroaches all over my body, was, 'Why don't they make teabags in larger sizes?'  Actually, I was also thinking, 'Will she run out of Dead Sea before she gets down to my knees?'

Not that I'm self-conscious about my size, or anything.

That evening, two of the men on the Week of Torture were talking to me and my sister at Mung Bean Time, and we asked them what happened when they had their massages.  Did they get to wear teabag knickers?  No, they said.  They were allowed to keep their normal pants on.

They wouldn't believe us about the teabag knickers and kept teasing us about them.  So, on the last day of the course, before breakfast, my sister and I filched a couple of teabags from the kitchen, found some string from somewhere and sat in our bedroom making teabag knickers for them.

You've never done that in a hotel bedroom before?  Where have you BEEN?

We waited outside the guys' rooms to present them with their special gifts, only to find that they had overslept, having sneaked off in the night - the sods - to have a drinking and junk food session in the local town.  But when they finally woke up and staggered into the breakfast room, we ceremonially presented them with the knickers, much to the bewilderment of the other guests, I'm sure.

But, if you knew my sister and me, and the way we are when we're together, you'd understand that we had bewildered the other guests days before that.  The peat falling out of our trousers when we stood up wasn't a good start, it has to be said.
Me memories Me travelling