February 08, 2013
I am so in love with bread and butter pudding that I would willingly have an affair with it if a) such a thing were possible and b) I were able to do so without subjecting my husband to the ignominious accusation of being cuckolded by a dessert.

Having accepted that adultery with a pudding is probably not the way ahead, here instead is a poem about the pudding I made tonight.  Step aside, Wordsworth. 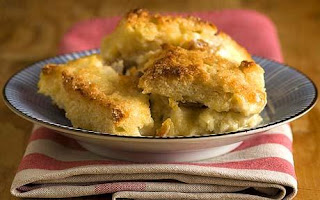 Tonight I made a bread and butter pudding.
It looked just like the one that's in this pic.
I made it on a whim all of a sudden.
You've never seen a pudding made so quick
(Forgive the adjective instead of adverb
But rhyming at this time of night is tough.)
We'd had our main meal and I fancied pudding
And just a toffee yogurt's not enough.

I dashed into the kitchen and in minutes
I'd buttered bread and sprinkled in sultanas.
I'd whipped up eggs and milk and poured them over
The bread, and then I put on my pyjamas.
(Forgive the odd forced rhyme.  It's nearly midnight.
But I was keen to tell about my pud.)
I scattered in some sugar and some nutmeg
And, Biblically, pronounced that 'It Was Good'.

(Forgive the half-rhyme at the end.  I fear that eating a bowl of bread and butter pudding the height of Kilimanjaro may have blunted my capacity for writing effective poetry.)

me and food Poems by Me