The loft in the house they were in now didn’t have old school books in it, just frayed scraps of carpet and an electric fire left there by the previous tenants.  No brown suitcase, heavy with school memories.  No photograph of her with missing teeth.  She couldn’t, then, trace her childhood through large round writing, Tudor kings, neat Maths, revision notes, school photos with shy smiles.

She could remember writing about birds, though, when she was about seven.  A project.  Choose your favourite subject and do a project on it.  She’d been given a good mark for that.  Funny, really.  She had no interest in birds at all now.  That made her wish even more that she could see her old school books.  How had she changed since childhood, that birds used to fascinate her?  Where that part of her had been, now there was nothing.

At some point, presumably, her mother, or somebody, had thrown her school books away.  They’d had a small house.  Maybe she’d just wanted to save space.  She tried to picture this, her mother sitting cross-legged on a bedroom floor, sipping coffee, leafing through her child’s early work with a fond smile before reluctantly adding it to a pile for disposal.  It didn’t fit.

No, it must have been her grandparents.   After her mother’s suicide, so someone had told her, her grandparents had cleared the tiny terrace of all its contents and burned everything.  At the time, the implications of this hadn’t been clear to her, but now she could imagine the scene.  The two of them, bereaved too early, bitter, feeding a greedy blaze in an old dustbin with Beatles records, medical certificates, boxes of toys, diaries.  Especially diaries.

Perhaps she’d been at school one day, in a cookery lesson, unaware that someone, somewhere, was dropping a pile of birthday papered exercise books, with her name on them, into an old box and then adding it to the flames.   Along with teddies?  Letters from penpals?  Favourite dolls’ clothes?  She scrabbled at her memory for times when she’d said: “Does anyone know where that notebook went, the one I wrote stories in?  Or my rabbit with the torn foot?”, but nothing was there.   Moving from place to place, with all that had happened, perhaps things like that had gone unnoticed, not missed, even precious things.

That birds project.  She hadn’t done it in an exercise book, she remembered now.  It had been carefully written on separate sheets of paper, made into a book using treasury tags and red card for the covers.

On the front, a picture of a crow, crayoned in black. 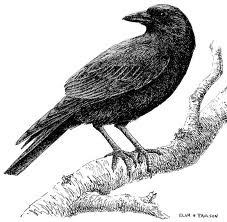