I don’t know what is like.  Once, I was as near as damn it, on a ship, with the chance to disembark and laze on a gondola trailing my hand in water, or sip coffee from a tiny white cup outside a café.  But I was fourteen, and David was seventeen, and we didn’t need what had to offer.  We’d made our own romance.
At least, that’s the way I prefer to remember it.
It was 1976.  We were on the SS Uganda as part of a school cruise around the .  The night before, there’d been a disorderly evening of storms, of portholes that showed no water, then all water, then no water.  Everyone screeched with delight in the ship’s common room as glasses slewed off tables and anxious teachers hovered, urging us back to cabins.  We pressed coins into the jukebox and played ‘Rock the Boat’ by the Hues Corporation, dancing without balance like badly-operated puppets.
David was with a group of friends, throwing his blonde head backwards and laughing as the ship see-sawed.  I was sure he hadn’t even noticed me; I was small and dark-haired, not pretty, and he was muscled and over six feet tall: a rugby player.  But as many of our friends sloped off holding their stomachs, he and I were among the few left in the common room, and he held my gaze.  By midnight, he’d draped his arm round my shoulders and I was proud in front of his friends.  I wasn’t the only one who thought he’d never consider me.
In the morning, in Venice, the storm’s mood had passed.  Teachers gave us maps of the city and warnings about timings.  ‘Back by four.’
But David and I agreed – was it his idea or mine? - that we would hide somewhere on the ship so that we could avoid the crowds and our teasing friends.  Soon the ship had emptied itself of our school group and the supervising teachers, all clutching their lira and white sunhats. 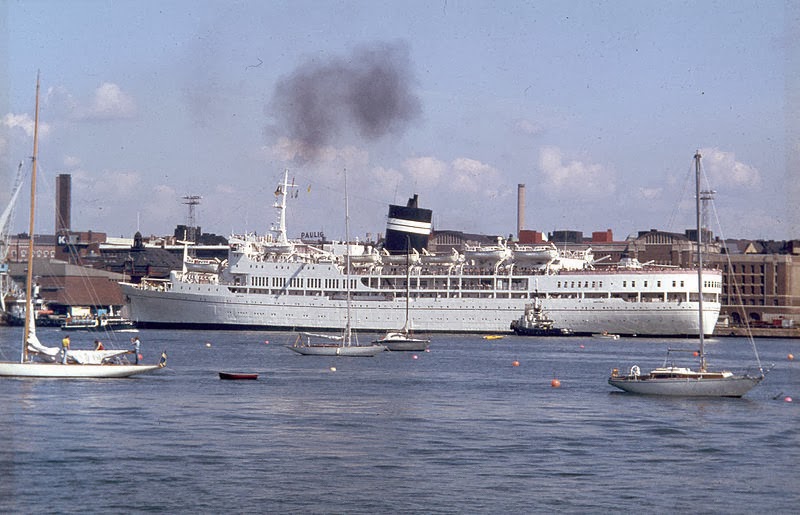 It was three hours before someone came to find us.  We nestled together in a corner on one of the decks, away from the glare of the fervent sun and of the ship’s staff, and while everyone else explored the waterways and the Venetian glass shops, we kissed.    On and on, we kissed.  His hands mapped the skin under my summer linens.  I leaned back several times and searched his blue eyes for a sign that he too was in love, but then just closed my own eyes and gave myself up to the moment.
Mrs Drake's voice came sudden, like a slap.  We stood up at the teacher's command, clumsy with disappointment and the heat of the day, smoothing down our clothes.  David wouldn’t meet my eyes as he mumbled ‘sorry’ while the diminutive Geography teacher lectured us.  David was at least a foot taller than she.  I’d expected him to be defiant, mutinous, defensive.  But he stood, head bowed, hands at his side.
Still, I couldn’t bring myself to care about punishment.  Nothing could hurt me now that I had David.
They separated us, though, and I was left in a bland, beige sick room alone.  I sat on the edge of an examination couch, swinging my legs and flicking through leaflets about sea-sickness for hours.  Then I was sent back to the dormitory and my friends.  I was a heroine for a time, and they harangued me for every detail.
All I really wanted was to see David and to hear him say, ‘I don’t care.  All I want is you.’  But, on the flight to England the following day, a Friday, I was made to sit with a teacher and David was at the back of the plane with another one.
Back in England, I called his home number hourly.  His mother said he wasn’t in.
At school on the Monday, I saw David’s blonde head, lofty above others across the dining room.  He was surrounded, as always, by a group of friends.
I jostled my way out of the lunch queue to go and speak to him, my throat dry with thoughts of a future.
As I neared his group, I realised he was holding hands with a girl in the sixth-form, a lithe brunette called Lisa who nuzzled her head into his neck.  'Hi,' he said, his voice lazy with disinterest, and his eyes looking straight into mine as if to warn, 'Say nothing.'

I don’t know if I want to go back to .  It’s meant to be a beautiful city.  But I’ve never had the travelling urge like friends who holiday in Rome or New York.  I guess David may have been to many times, perhaps with Lisa and a couple of blonde-haired boys.  I wonder if, while he’s explored the Marciano Museum, or a fruit market, he ever remembers me and the things he told me in between kisses.
At least, I think he told me those things.