Sad news about Robin Williams.   Today I watched an episode of 'Whose Line is it Anyway?' to which he brings chaos and disorder and hilarity like an untrained puppy, refusing to follow the instructions given and appearing behind desks and in front of cameras at unplanned moments.

Then I watched some clips of him ad-libbing in 'Good Morning Vietnam'.  How did he do that stuff? His brain was as quick as electricity and I don't know how his mouth kept up.

Another clip, from 'The Dead Poets Society' has him, in the role of John Keating, ordering the students to tear out a page of 'excrement' from a book on poetry in which the editor rambles on about how to measure a poem using a graph.  'Rip it out!' he cries, and the boys fall to the task with abandon, apart from one who uses a ruler to make sure he does it in a straight line.  One senses that the poor boy is having trouble taking on these anarchic ideas.

All this reminded me of something I read recently about art, whether that be writing or sculpture or dance or theatre.  It was about the element of surprise, and that it's the unexpected in art that catches the heart of the reader or viewer and brings delight.  I think this was the secret of Robin Williams' success. We love the Peep-Bo in childhood, and it teaches us to enjoy the maverick, the Jack-in-the-box, the picture of the old lady that, looked at another way, is a beautiful woman, the cheque in the post we'd forgotten was coming, the one poppy bursting out from a concrete slab, the sudden change of key in a song .... 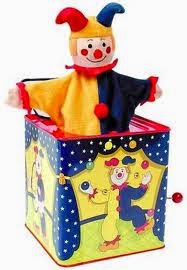 That's why one of the most common exercises I give students at school (or in creative writing classes with adults) is to devise different endings for common clichés.  It's always said that you shouldn't use clichés, but in fact sometimes a cliché which has been subverted causes more of a surprise, and therefore more pleasure.

It all depends what you want to say.

I'm just playing around with language here.  But I love doing it.  And so did Robin Williams.  So, that was my little tribute to him, and I pray for his family.  I know what it is to be left behind in that way, wondering.

Not all surprises are good ones.


Me lurving English Me opinions Me writing