November 21, 2014
The Gas Man has Beeneth.  He came today to check our gas appliances and it was my day off work so I was here to let him in.

Only people of a certain age will understand that cultural reference to Flanders and Swann singing 'The Gas Man Cometh'.  If you've never heard it, it's only 2 minutes long and it's very funny. It's all about what happens when you have people 'in' to do jobs and things go wrong.


By the way, that's the first time I've ever learned to post a video link into a blog post, As I've now written 560 posts according to my stats, I don't think I could ever claim to be a fast learner.

Talking about technology, I suppose the modern equivalent of The Gas Man Cometh would be The Computer Man Cometh.

'Twas on a Monday morning
I rang Computer Man.
He said, 'I am an expert.
I'll help you if I can.'
But he couldn't come 'til Thursday.
I tried hard not to mind
'cause I had to use a notepad
but not the modern kind.

Anyway, the gas man came because we rent the house and he was asked by the landlord to check our cooker, boiler and gas fire.

Is it just me, or does anyone else find it the height of awkwardness, having someone in the house doing a job?  This was my inner monologue while he was here:

Should I make friendly conversation after the initial hello? If I do, and he's here for longer than an hour, will I regret it?  What will I find to talk about?  Would it make me seem like a desperate housewife? Or should I leave him alone to do the job? If I do, will I seem supercilious and cold? Is it okay for me to sit here typing on my laptop or will he assume I spend the day on Facebook when actually I'm writing? Should I say, 'Oh, I'm writing a book' or would that sound as though I were trying to recruit fans and get him to say, 'What about?' When I do check Facebook, should I turn the volume down so he can't hear the bee-doop of a message arriving?  When do I offer tea or coffee? As soon as he arrives, or will that seem forward, as though he's popped round for a social chat? After ten minutes? Twenty? If he says, 'Oh, I'd just finished the job, actually,' what would I do then, with the kettle half-boiled? Do I give him biscuits, and if so, is one variety enough or should I offer two in case he hates coconut cookies but loves dark chocolate digestives? Do I ask him how the job is going or will that seem as though I'm questioning his ability?  What if I need the loo? Can I disappear upstairs, leaving him in the kitchen, and do I need to announce where I'm going? What if I didn't announce where I was going and then he needed a spanner? What if he needs the loo? Should I say, 'By the way, if you need it, the toilet's upstairs,' or do I wait for him to ask?  When I said, 'My husband's at work', did it sound like an invitation? Should I have added, 'But he'll be back very soon' just in case he thought it was?

The gas man was here for two hours, and the monologue above only represents a quarter of the dilemmas I encountered. As you can imagine, I got very little writing done, which is the bad news. The good news is: the cooker, boiler and gas fire are all in good working order, and he liked the dark chocolate digestives, which I don't. That left the coconut cookies for me when he'd gone and I needed comforting after all that stress and awkwardness.

Fortunately, he won't cometh again for a whole year. 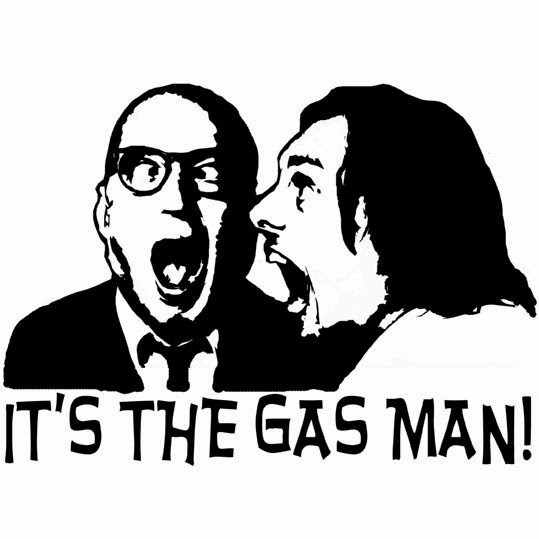