Evidence that doing crosswords could soon get really awkward

In case you missed the news, Oxford Dictionaries announced a new Word of the Year yesterday, except that what they've chosen is to the world of words what I am to the world of Paris catwalks, little black dresses and getting through train station barriers without turning a smidgen to the side.

The 'word' they have chosen is this. 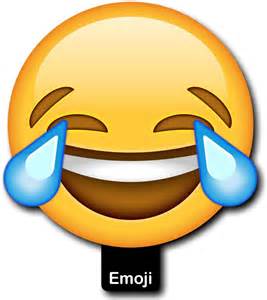 It's the graphic that's been chosen. Ignore the word 'emoji' underneath it. (Why not just go ahead and ignore all words, every word, from now until you die? Everybody's doing it.)

The graphic is called the 'Face with Tears of Joy' emoji.

Here's a news article all about the winner and reasons for its choice. The piece also lists some of the words deemed not to deserve the title of 'Word of the Year'. One of them is 'refugee' but, golly, who's heard THAT recently?

Another candidate is 'they' as in the kind of they used instead of he and she when you reach that awkward 'am I about to be sexist?' moment.

The fact that they have chosen a 'Face with Tears of Joy' emoji and not a real word makes me feel like this: 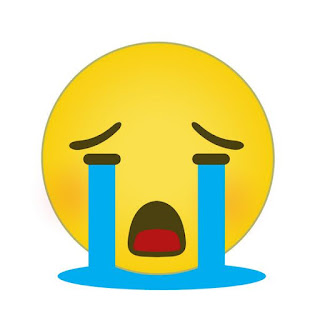 This is called the 'Face with Tears of Linguistic Disappointment' emoji.

However, it could also be

1. an entry into the 'Person Most Able to Cry Perpendicular Tears' competition

3. proof that when you are bright yellow your tears look a different colour to everyone else's

4. a reason not to have eyes shaped so long and narrow that your tears can only come out like tagliatelle

5. evidence that using too much blue eye shadow just before you watch Bambi is never a good idea

6. a reason to cut down on the blueberries

7. one way to make people feel sorry for you but not just because of the crying

8. proof that even if you have no hair, if you cry like this, you get a beard of sorts

9. an entry into Who Can Do The Best Charade For 'Cry Me A River'? competition

10. a handy way for a schoolteacher schoolteachers to demonstrate the primary colours, but only if he she they sticks stick his her their tongue tongues out while crying

Me lurving English Me opinions