Reasons why Fran might need to buy a woolly hat

As I gazed around me at the floor of the hairdressing salon after my haircut, I thought, 'Surely that's at least a kilo.'

My hairdresser went a bit crazy with the scissors, like a person with a lawnmower who can't find the off-switch. I think she may have been cross with me because I rang her in the morning and begged for an afternoon appointment. ('Please, please, please fit me in - I look as though I've been dragged through a hedg - no, scrub that - I AM that hedge.')

Why would she be cross, you ask? Surely she wants the custom.

The thing is, I only ever have a dry cut.  Unlike most other women I know, I hate being shampooed and frothed and dried and fluffed and puffed about in the salon - I want to get out of there and back home where people only touch me with my permission and ideally a warrant.

So she sprays my head with a garden sprayer, cuts for about five minutes, takes a paltry amount of money from me, and off I go, leaving her needing to book in three perms and a full highlights if she's to pay the rent.

So, yes, I think I may have annoyed her, which is why she went at me like Edward Scissorhands in a hissy fit. Hence, before I went into the salon, I looked like this, minus the orangeness and the cocaine-eyes ...

When my hairdresser had finished with me, I looked more like this. 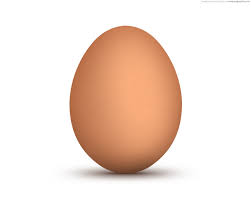 I know you think I'm eggsaggerating, but when I washed my hair this morning, it took three drips from the tap and one atom of shampoo, then I mostly dried it by strolling past a draught coming through the bedroom door keyhole. Then my husband breathed out as I passed him, and that was the hair-drying sorted.

On Sunday mornings I go to church. I hesitated today, though.  I felt as sheep must do who've been diagnosed with lice in their wool, shorn as a matter of urgency, and then sent back into the field for all their fully-woolled and fleecy friends to laugh at.

I walked to church and arrived, newly-exposed ears as red as peonies from the winter chill.

I had conversations with twelve different people during the course of the morning, and not one person mentioned the haircut.

I would use the term 'the elephant in the room' but for its unfortunate connotations. See earlier comment about weight loss.

'I felt like someone bereaved,' I said to my husband later. 'You know, when people you talk to just beat around the bu - skirt around the key issue and avoid looking you in the eyes. Or higher.'

'Pff,' I said. 'They noticed. I saw some eyes widen in a kind of Gandhi-and-Yul-Brynner-have-nothing-on-her way.'

He told me I was being over-sensitive, although now that all my brain tissue has been laid bare to the elements, that wouldn't have been surprising.

If any of them say, 'Miss, are you leaving teaching to go into the Army?' I will run out, sobbing.