September 03, 2017
If you haven't read Episodes 1 and 2 of the story of our holiday flood adventure and you wish to catch up on the details, they're here and here.


Episode 3 - the final episode, including the arrival of the Giant Bee Dehumidifiers

... We already felt well acquainted with Wednesday when daylight broke and it was time to get up, as we'd discovered the flood at 2 am and the firemen hadn't left until 4.

No worries. Absent-mindedly walking onto the damp quarry tiles in bare feet soon jolted us into the real world.

And we had proof that it had not been a surreal dream in the form of a fire officer's torch. Here's a quarter of Paul, holding the torch. On his face was a look that said, 'I'm trying not to enjoy how macho I feel, holding this.' 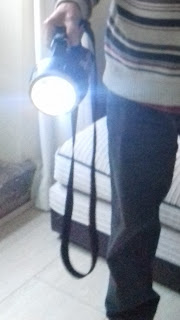 What about our morning tea?

We drank our Costa buckets of tea and breakfasted on cereal, because for the want of a blah-blah-blah-blah you-know-the-rest the toaster was lost. At least temporarily.

As it turned out, it was lost more temporarily than we'd imagined. At nine, along came four workmen, sent by the owner, to inspect the damage. The four stood in the hall ho-ing and hum-ing and ha-ing. 'Don't suppose you were expecting this when you booked, were you?' one of them quipped.

'On the contrary,' I said. 'We particularly selected 'burst pipes' and 'severe risk to life via electric shock' alongside 'garden view' and 'dishwasher.'

'How long do you think this will take to get sorted?' we asked them.

'Not sure,' they said. 'We'll know when the electrician's been. He'll be along in an hour. We're just ho-ers and hum-ers and ha-ers by trade.'

We waited in. 'We'll definitely need to pack for home,' Paul said. 'People whose houses flood have to wait weeks for them to dry out before electricity can be turned back on.'

In my mind, I began to plan what would need packing first.

Sure enough, an hour later saw the arrival of a cheery electrician, not at all daunted by the sagging ceiling burdened by water from above, the still-dripping light fittings and an aroma called 'Damp and Musty' not yet exploited for its full potential by the giant perfumeries such as Chanel and Lancome. 'Sorting this out won't take long,' he said, pulling a plastic light fitting from the ceiling as casually as if taking apart a Lego house, and emptying the pool of dirty water it contained straight onto the quarry tiles. We had to jump back, as though from a passing car on a rainy day.

'I'll need a hairdryer,' the electrician said. 'Do you have one?'

I looked at his hair. Nope, it was dry. So he really did mean he'd use it to fix the flood damage.

'We'll leave you the key,' we said. 'We're going to Worcester Cathedral.'

His face said, 'Blimey. They ARE upset.'

'I'll be done by lunchtime,' he said, trying to comfort us. 'You'll have electricity by then.'

'That's not even possible,' Paul said, as we waited for a bus to Worcester.

The electrician was right, though. We did have electricity when we got back. We didn't have wi-fi (this relied on the house above us getting its electricity back, which didn't happen until Thursday). We didn't have any rugs in the flat (these were draped in the garden to dry, across the garden furniture, but if you imagined it as a contemporary art installation, and didn't want to sit on the furniture, it was fine).

We didn't have complete peace of mind (we could hear the thump-thump of the workmen in the house above and every now and again this resulted in a drip-drip through a crack in the hall ceiling and a few missed heartbeats).

We did have a visit from two of the firemen to retrieve their torch. Paul handed it to them, holding on to it for a tad too long as one gives over a body part one can't really spare. They tugged it from his grasp. He sighed. 'Thanks for lending me your torch and a tiny taste of your raging masculinity,' he said.

We'd stay for the rest of the week as planned, we decided. Yes, there was disruption, but we wanted our holiday.

We had reckoned without the Arrival of the Giant Bee Dehumidifiers and Mahoosive Fans.

On Thursday morning, they arrived in vans. I realise the way I've written that could imply that they themselves were driving the vans and, because I'm not entirely sure this isn't true, I will leave it like that. By this point, anything seemed possible.

We watched as men who never have to go to the gym and lift weights hauled the Giant Dehumidifiers and Mahoosive Fans upstairs into the Big House. They switched them on. We could hear the noise from our flat, like a swarm of monster bees above our heads plotting a world takeover.

A workman knocked politely at our door. 'Just to let you know we've installed dehumidifiers and fans upstairs,' he said.

'If it's okay with you,' he said, apologetically. 'we'll put some in your hall. We need to start the drying-out process. You won't have to turn them on unless you're out if you don't want to.'

'We won't want to,' we said. 'We're too young to be put into asylums for the rest of our lives.'

In came our own dehumidifier and fan. The workman showed us how to turn them on and then said something else.

'Pardon?' we said, the way people do when standing under helicopters about to land. We'd watched his lips move, but that was all.

He turned the machines off. 'I said, they might get a bit annoying. Honestly, just turn them on when you're out. Are you going out?'

'In about sixteen seconds' time,' I said, 'funnily enough.'

As I didn't get a selfie with me and the firemen, here's something almost as good - a picture of me with our Giant Bee Dehumidifier. (I am standing behind it.) 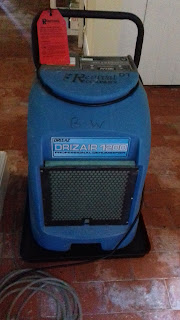 So we did go out. We went for the rest of the day, letting the GBD and the MF do their work, and we came back late that night, turning them off. We tried to pretend we couldn't hear the hum from upstairs. In bed, I plugged in my earphones and listened to more of the World Service, eventually falling asleep.

Paul, however, slept not a wink. He told me the next morning that as the world got quieter outside the house, the persistent hum of the GBDs and MFs seemed louder and louder, until he felt as though they'd climbed inside his head and were then humming from the Inside of him rather than the Outside.

We packed early on Friday morning, ordered a taxi to the station, and came home to Leamington Spa. Our house was warm and dry, with not a Giant Bee Dehumidifier in sight.

On Friday evening I sent a long email to Customer Services at the holiday company, detailing all our experiences (although without the jokes and with no mention of bees).

On Saturday morning I received a reply from Customer Services saying that they were sorry we'd encountered problems and would be in touch as soon as possible when they had investigated.

This morning (Sunday) I received a happy, cheery email from Customer Services saying, 'Hi! Hope you had a fabulous time at one of our holiday cottages recently! Please fill in this form and let us know if you have any comments about your experience. Please holiday with us again!'

For those ladies still disappointed about the lack of visual evidence, I've found you a picture of a really, really hot fireman.