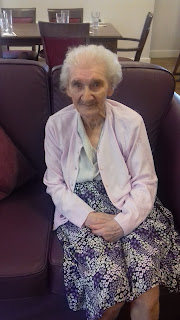 She was called Kathleen (her grandmother was Irish) and she died just before Christmas 2017 aged 95. We used this picture for the front of the Order of Service at her funeral. She always looked chipper in pink or baby blue.

She had three children: two girls and a boy. One girl was my mother, who died aged 31 after years tussling with alcoholism and unwise love choices. Another girl was my aunt, hurried into the graveyard at 60 by an impatient cancer.

Her son, my uncle, has visited Gran daily for years and years, and I suspect his car still noses towards the road where the care home is by instinct.

Since moving back from London to the Warwick area, where I was born, I've seen Gran once a week or so. When she was still in her own flat, I'd buy haddock and chips on a Saturday, puffing up the hill from the fish shop to her place. Sometimes we'd watch horse racing on TV or I'd pull out a crossword. Once she'd moved to the care home, my regular duty was to trim and paint her nails. 'Warm Peach or Pearly Pink?' I'd say, holding them both up. In the last year, she's barely been able to see the difference, but she still liked to be given the choice.

I wrote this short poem for her funeral service. It's based on objects with which I will always associate Gran, especially during her last years. The 'basket' mentioned in the poem is one of these that hangs on a walking frame. Hers had a Christmas bow on it, still there from when I bought the basket four winters ago. It made it easy to locate her frame among all the others in the care home, if it strayed. 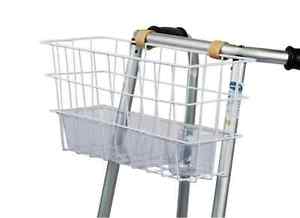 The baby-blue cardigan that matched your eyes
and, if it bore a gravy stain,
the tissue you’d dab the mark with until you’d killed it.

The sachets of Hermesetas you’d collect in your frame basket –
your record was twenty-six -
in case there was a world shortage.

The startling-red nail varnish you were too shy to say no to
in case you offended the carer
even though you said you felt like a loose woman.

The custard cream, lifted from the saucer,
then dunked slowly, once, twice,
as if in a sacred ceremony of biscuit-worship.

The cardigan’s pockets and sleeves
where you stashed the Mansize Kleenex armoury
with which you fought off your anxieties.

The mysterious unaccompanied popsock in the basket,
tangled amongst combs and brushes
and the half packet of Tuc cheese crackers
you swore weren’t yours.