Evidence that many of Fran's childhood memories are based around sugar

March 19, 2020
Well, this is all very strange, isn't it? I'm at home, in front of the fire, with no English students to teach because the government, aided and abetted by the Corona virus, has cancelled the GCSE examinations and where there is no examination there is no need for a private tutor.

Bye bye, bank balance! It was nice knowing you.

When news first broke about the Corona virus, the image that I had in my head was that of a man who drove a truck around the streets of Warwick when I was a child in the 1970s. He delivered bottles of fizzy pop made by Corona. He sold Dandelion and Burdock which tasted like a mixture of liquorice, aniseed and disinfectant, as well as a sickly-sweet concoction called Cream Soda which made your body 97% sugar for a while and corrupted all your decision-making processes.

Also for sale were lemonade, orangeade, cherryade and Band-Aid, although I may have remembered wrongly with that last one. 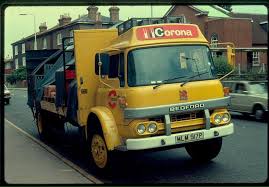 What I didn't know until ten minutes ago when I researched it was that the Corona brand began as an attempt by a Welsh company to mitigate the effects of drunkenness amongst Welsh miners. That attempt failed, something which could probably have been predicted, as no self-respecting Welsh miner is going to be lured away from a pint of bitter by a glass of orangeade the colour of severe jaundice or a self-tan that went sorely awry.

The innovative idea behind the Corona delivery, though, was that the drinks came in glass bottles and you were rewarded for returning those bottles with actual cash - a penny or so, probably - but enough to prove an incentive. I'd beg my grandparents to let me take out their Corona bottles then bomb off to the corner shop to buy as many flying saucers as I could. There's nothing so thrilling when you're 12 as having bits of rice paper clinging to your upper palate for half an hour.

Here's a link to the Corona story if you're interested in knowing more.

Do you remember flying saucers? If not, here's a picture.

Sorry. Not those ones. I know I was gobby as a child but not THAT gobby. 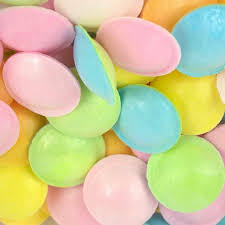 And, oh my word, these! I'd forgotten people used to think this was ABSOLUTELY fine. 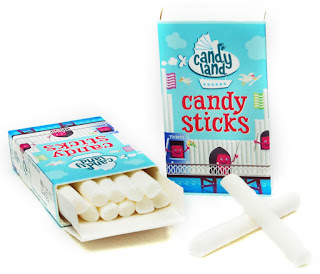 Fake fags! We thought we were Lauren Bacall, puffing away on street corners or outside the school gates like addicts.

At least those didn't have the nicotine. But sugar has a lot to answer for, too.  I spent so much time in the dentist's chair as a teenager that I felt disorientated when vertical.

I think they should bring the Corona man back. The van used to play a tune as it drove around the streets, like the ice cream man. A happy sound, full of promise.

Perhaps a name-change, though, in the current climate?

me and food me childhood Me memories