I mentioned the 'schooldays haiku' competition last week that I ran as part of my book launch.

First, here's an anonymous one that was put through my letterbox. I love the fact that someone decided to do this. I don't know who it was for sure, although I do have a couple of ideas. But there's a sadness about it that touched me. 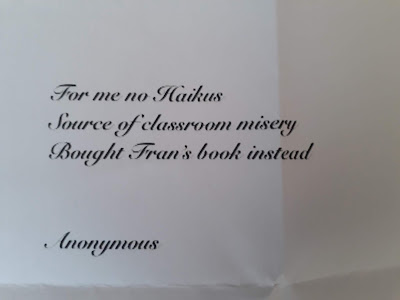 I'm posting the winning entries and highly commended here as I think you'll enjoy them. The winners get a free copy of my new book 'Miss, What Does Incomprehensible Mean?' and the highly commended get .... well .... highly commended. I didn't intend to do a 'highly commended' category but frankly had too many lovely haiku entered not to give them a mention, too.

All winners and highly commended have agreed that I can post their poems and their names. I'll hold off from posting their full addresses, dates of birth and internet passwords.

I have added some comments to show you why the haiku were chosen.

The three winning haiku (in no particular order):

School when I was five.
I cried when I arrived, they laughed;
Then and through the years.

I particularly like Sheila’s haiku because a) the last line gives it a haunting quality and says so much about the effect of childhood experiences; b) she has included some internal rhyme in ‘five’ and ‘cried’ and ‘arrived’ which is impressive; c) the juxtaposition of ‘cried’ and ‘laughed’ in the same line helps to show how crushing this experience is; d) the way Sheila has constructed the poem gives it natural rhythm when read aloud.

Russell's haiku appealed to me very much because a) it is witty and hinges on a joke; b) the Van de Graff generator is fitted into the poem very cleverly and is a strong image everyone remembers from school; c) the use of the question in the last line acts as the punchline; d) the poem recreates the tension of a new term, whether for teacher or pupil.

Sidetracked by our guile
From algebra to steam trains,
Dear old Mr D!

Sarah's haiku really caught my attention because a) there’s a tone of real affection for the hapless teacher in the last line’s exclamation which instantly resonates; b) there’s a joke in ‘sidetracked’ and ‘steam trains’ which is genius; c) the ‘guile’ of the class is something everyone would recognise; d) the stresses of the individual words create a strong rhythm which also evokes the ‘train’ theme of the poem; e) there is alliteration in ‘Dear old Mr D!’ which really helps to create that affectionate tone. 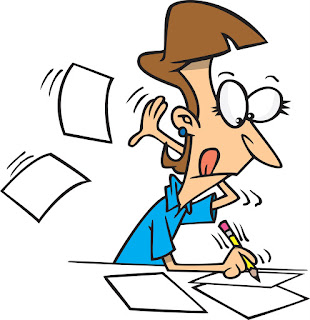 Friday afternoon
English teacher been to pub
Asleep on the desk

Jackie's poem appealed to me because, simply and practically, it presents a scenario so many of a certain age would recognise. Setting it on a Friday afternoon is clever, emphasising the impression of a weary teacher trying to cope – somehow! The last line ‘Asleep on the desk’ has a sense of finality about it, as if to say, accept it! That’s how it is. And, indeed, that’s how it was.

I really like the use of ‘speech’ in Chris's poem, even though speech marks are absent. In fact, you could say the lack of speech marks represents the ‘silencing’ of the child. Somehow the bald phrase ‘school lunch’ resonates: even if this particular experience isn’t everyone’s, most of us have ‘school lunch’ memories of our own. There’s a real sense of terror in the poem, and also an impression of lasting effects.

French lessons in school
Some phrases stay with me, like
Fichez-moi le camp.

Ros's haiku has a real twist and, even more delightfully, if you don’t speak French, you have to look it up and the surprise is lovely! There’s a real irony in the fact that she sets up the expectation that the speaker in the poem has remembered some French, and then it turns out quite differently. Very witty.

I honestly didn't expect so many people - and from so many different areas of my life (writing, teaching, church, friends etc) - to have a go, and I was seriously chuffed about that.

There were other witty haiku and moving haiku and evocative haiku, too, and to decide, I had to be strict about my competition guidelines, in that the poem had to be about schooldays specifically, and had to try and capture the essence of school life. I was also looking for use of literary techniques (consciously-used or otherwise!) that added to the effectiveness of the poem.

Here are some of the others that I liked in particular. I haven't put names to these as it would take a while to ask everyone's permission to publish. Perhaps not everyone who entered was expecting them to be made public. But if you want to own up to one of them (if you wrote it, OBVS) then do say something in the comments below.

And if there are any that strike you particularly (and you think should have won - these things are subjective!) why not say so, and encourage its writer?

First period ends -
the freeze creeps in through my skin -
outdoor chill is here.

My children say that
Teacher runs through me like pink
letters inside rock.

Trifle sits untouched
Me and the dinner lady
Stare out at high noon.

Another day done!
Glad to be finally home.
Red, white or rosé?

Hearing children play
I stare at the floor,
Hoping to be included.

I hate calculus
It's incomprehensible
Never needed it!

Wow! There are so many memories here, aren't there? And far too many of them are sad :(

Well done, everyone, and thanks to anyone else who entered.

Lastly, if anyone fancies having a shot, post yours in the comments. I'd love to read them.