Reasons why Fran will avoid woods for the foreseeable future

I arrived back on Friday from a week in Wales with my son, daughter-in-law and two grandchildren.

(Just then, I typed 'groundchildren' instead of 'grandchildren', and soon you will see how ironic that is.)

If you've been following this blog for a while, you'll know not to expect post-holiday descriptions of lush landscapes, snippets of pastoral poetry or anecdotes about my daredevil surfing exploits.

Oh, okay, then. Here's a waterfall. But that's all you're getting of anything postcardy. 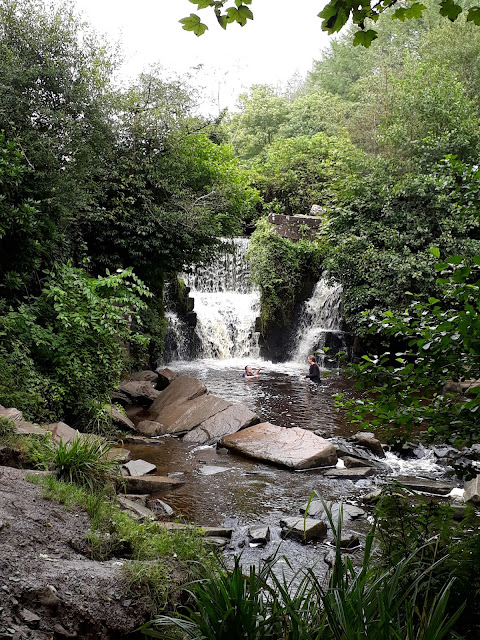 The weather forecast, as we left the Midlands to drive to Wales, was not favourable. In fact, we had packed raincoats, umbrellas, wellingtons and a book entitled 'First Aid for the Drowning.'

For most of the week, however, the rain lashed down during the nights, then in the daytime the sun shone, burning and shrivelling any exposed face or limb without mercy. We slapped on sun cream but not as fast as the sun slapped our cheeks and foreheads.

Oh, all right, just one more photograph depicting an area of natural beauty. This is one of the Gower Peninsula's sandy beaches. Sorry it's spoiled by my socks and boots (not included in the natural beauty description). They are my miserable failure of an attempt to model alluring beachwear. 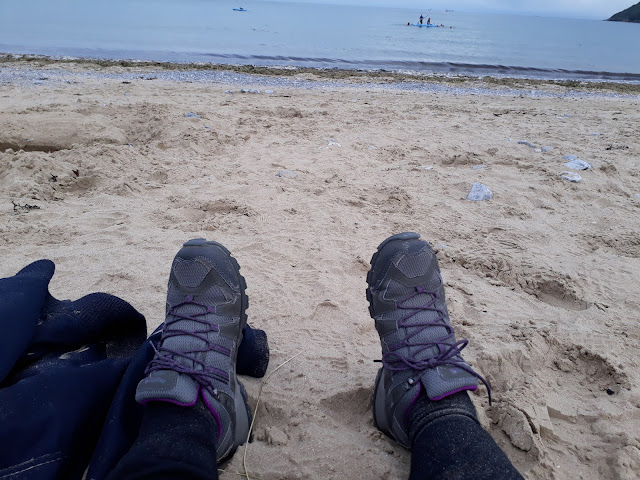 Those boots came in useful, though, when one day we walked around a village then got helplessly and panicked-ly lost in a wood, having followed a right-of-way back to the beach only to find it very much a wrong-of-way.

Here's a recipe for you.

A wood containing a wrong-of-way

Much more mud than that.

Take the middle-aged female and the dodgy knee and mix with all the other ingredients until hysteria ensues and the female is convinced she is in her final hours.

The groundchildren, needless to say, were - quite literally - in their element. 'It's like the Secret Seven,' my grandson squealed, navigating the spiteful tree roots and the quagmire with ease while I tried to persuade the earth not to suck me under. My boots acted like plungers. SCHLOOP. SCHLOOP. SCHLOOP. SCHLOOP.

We made it half-way through the wood before we realised that the route back to the beach, if it had ever existed except on an OS map, was blocked. I had battled downhill on the mud, slipping and sliding like a skier, only not on snow, and without skis to help, and not in an enjoyable way. All that had kept me going was the thought of the fish and chips we'd promised ourselves for lunch when we got back to the beach.

I know. Shallow as heck.

'We'll have to climb back up and find another way,' my son said, having tried several routes but admitting defeat.

It would have been churlish to sob at that point, so I did it deep inside my soul and felt my liver and kidneys heave at the power of it.

Grabbing trees for support, I hauled my plumpness back up the hill, sucky step by sucky step. My knee complained but not so loudly as it had down hill, even when my boots lost their grip and I risked tumbling backwards onto my two small grandchildren, crushing them deep into the swamp.

It's not a story you'd want to relate around the fire years later over cocoa.

When we emerged from the wood, the sobbing inside my inner organs began to quell and I felt a little Secret Seven myself, having survived the ordeal. Had someone in an apron turned up at that point with warm scones and a jug of fresh lemonade, it would have been even better.

My fish and chips were delicious, though, seasoned with salt, vinegar, and the pleasure of not having perished in a bog.