It's nearly a month since Christmas and I still have my pile of books and notebooks from friends and family on a chair by the sofa. I can't bring myself to put them all away. There's no reason why I should. No one's dared to move the pile so that they can sit  sat on the chair for a while anyway.

But these are lovely presents: novels, books of poetry, books about poetry, delicious notebooks .... what's not to like?

I was married in April 1982. At the end of that month, I turned 20. Yes, a young bride, and one who wasn't so delighted with her birthday present from her new husband. 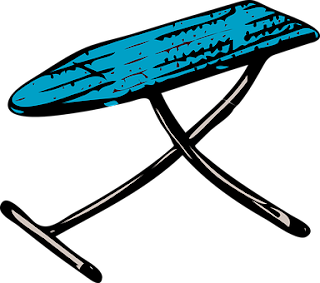 'I've bought you an ironing board cover, too,' he said, looking pleased. 'It's the right size. I've checked.'

And indeed he had. It was prettier than the plain blue one on this picture: flowery and cheerful.

Nevertheless, we had words. I was compassionate, don't worry. I was his first love and the only other woman he'd bought presents for was his mother who was a domestic goddess of the highest order and would have been disappointed with fripperies such as boxes of chocolates or posh hand cream. Can openers ... ladles and fish slices ... a three-pack of bleach ... these warmed her spring-cleaner cockles.

Over the following years, his present-buying improved. There was one year in which his performance dipped and he bought me a lamp for my birthday. 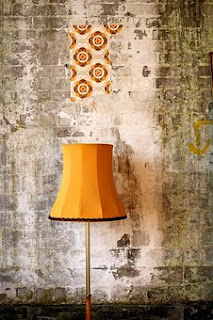 Why is that so bad? 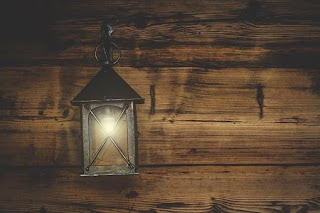 At the time, our washing machine lived in the 'outhouse'. It used to be the outside toilet when the house was built in Edwardian times but had been converted into a utility space.

'I know you don't like going out there to put the washing on in the dark,' he said, as I unwrapped my giant box of Milk Tray, Chanel perfume and new silk dressing-gown lamp.

'Thank you, dear,' I said. 'I do indeed hate to go out in the dark as there may be an axe-murderer in the garden. Now, I'll be able to see him clearly and guide him into the house so that he can dispatch you in the light.'

Other than the Year of the Lamp, my husband has sharpened up his skills, buying sparkling wine, chocolates, my favourite Coco Chanel, flowers. As a teacher, I would call this 'rapid progress'.

But time has passed. We are both middle-aged now - in fact, he's 65 in September - and although on birthdays we make more effort, Christmas has brought a new present-buying tradition, particularly as funds have run lower. The 'joint' present.

The joint present is usually something we know we need for the house but which has been on the list for years because it's not top-priority.

So, this year, he unwrapped the king-size duvet cover and matching pillowcase set and expressed surprise, as did I, even though I'd ordered, wrapped and labelled it and he'd agreed to the pattern when we looked on the John Lewis site.

He also unwrapped the knife block. Again, we both claimed to have known nothing about it, despite having trawled Amazon looking for the one we wanted. 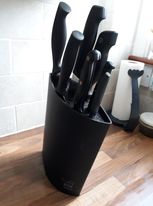 Romance is dead but the knives are lovely and tidy
Over the last few years, we've bought each other a vegetable chopper, a new set of pans, a vacuum cleaner and three bathmats.
Being middle-aged can help this process along. We've often forgotten, between the wrapping and the unwrapping, what we bought. Then it really is a surprise and, even if it is only a saucepan, at our age, that little frisson of shock is all we can cope with before our hearts do strange things.
A surprise kitchen gadget for Christmas is one thing. A surprise cardiac arrest is another.
So, I can forgive him for the ironing board incident. As it turns out, he was ahead of the curve.

Me at Christmas Me at home Me husband