My week in photographs. Enjoy! 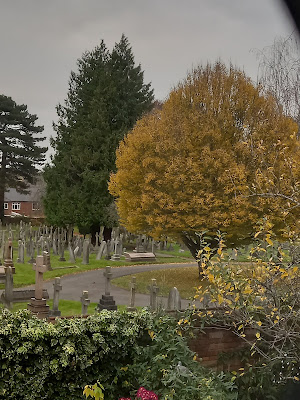 1. This is the view from my bedroom window. Our house overlooks a Victorian graveyard (or 'gravy yard' as my granddaughter dubbed it and as we now call it). How about this for illustrating the difference between evergreen and deciduous? I can't help thinking that the bright orange one looks smug and flaunty as though it knows it's more interesting than its green neighbour. All we need, though, is a windy day, and the smugness will be wiped from its face as it shivers, embarrassed by its nakedness, while the green tree revels in its warm coat. 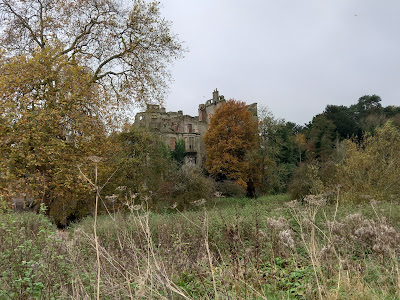 2. This is Guys Cliffe House, an ancient ruin which I pass on my daily walk. 'Hello, ancient ruin!' I call to it and back comes the echo 'Hello, ancient ruin!' Rude! Thirteen years ago, when we were exploring the Warwick area with a view to moving here and renting a house, I took a similar picture and sent it to all my friends, saying something like, 'It might need an update but the landlord assures us it's full of character and well-ventilated.' 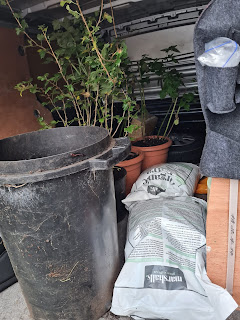 3. My daughter dropped by yesterday. She drives a van and my husband had asked if she'd help him transport 'a couple of plants' to his allotment. We were right to be sceptical. This 'couple of plants' came from a man who goes to the shops for 'a couple of bits' and comes back with three aisles' worth of goods, and the man who tells us that the walk he has planned for us is 'a couple of miles' only for us to discover that we have walked from our house in the Midlands to Inverness by mistake. The couple of plants turned out to mean a large collection of giant triffids, several lumpen bags of compost and a huge black bin. I watched with her as he loaded it all up and each time my husband appeared from our side alley with a trolley, we thought he'd brought the last items, but, no. Like a magician pulling scarves from a hat, he had plenty more where that came from. 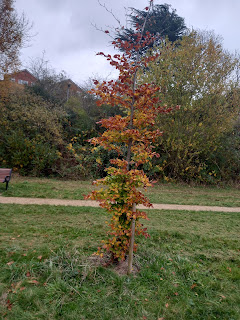 4. Going back to trees, I found this autumnal baby tree so intriguing: so young and yet so old, all at once. It's one of perhaps a hundred trees that have been planted in some fields near us and as I've walked in those fields during spring and summer I haven't noticed the new trees much at all. They've faded into the background. But autumn came and suddenly it was as though they'd foraged in their wardrobes for something more showy, tired of not being noticed and keen to make a splash at the party. 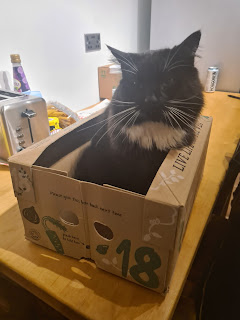 5. Sticking with the theme of trees, here's a box made from trees with a cat in it. The cat is Boots and belongs to the van-owner daughter already mentioned. She sent me the picture. Boots looks as though butter wouldn't melt, doesn't he? Well, our daughter was telling us about the problems Boots causes for her when she is conducting sensitive conference calls about bereavement from her home office. If she forgets to shut him out, the calls end up with extra sound effects provided by Boots as he bites the heads off live mice then crunches away at their little bodies with gusto. She has to wait until the conference call has ended to clear up his gravegravy-yard of victims.

Do you have a picture that sums up your week, followers? Post it in the comments - I'd love to see it!

me and Nature Me out and about Me photos