It's Saturday evening as I write. This time last week my body still comprised one-fifth woman and four-fifths pudding. I was so stiff with starch that I couldn't bend at the waist to take off my socks at bedtime. I felt as though all my internal organs had been re-upholstered.

Despite all this, non, je ne regrette rien.

I had gone with two friends to The Pudding Club. It was their 60th birthday treat to me and - well - what an experience!

I'm aiming to go again on my 70th, 80th, 90th and 100th or should I ever tire of life as it could do what Dignitas does but with added custard.

Have you heard of the Pudding Club? It was started by people who felt that the traditional British pudding should be saved from extinction and celebrated. Because of this, the evening is full of ceremony and ritual as guests make their way through seven puddings, all paraded in regally, applauded and cheered.

Puddings are in the news. There's a documentary on the BBC at the moment about the pudding chosen to celebrate the Queen's Platinum Jubilee. The winner is a trifle, although it looks nothing like the trifles I knew from the 1970s. Ours had damp sponge like eating a sweaty glove, jelly as hard as nails, and the hundreds and thousands bleeding into the fake cream.

The Pudding Club is based at a Cotswolds hotel in England. We arrived, along with about 25 others, were given a Bucks Fizz, and received a talk from a Master of Ceremonies about what was to happen to us. Much was made of the 'sugar rush' we could expect. Some guests looked apprehensive. The MC hadn't mentioned spontaneous combustion but the words hung in the air. A man who'd drunk a pre-pudding pint of Guinness was told that it may not have been his best move (and could indeed have been his last). We were advised not to leave our favourite of the seven puddings until the end because our attitude to it could well have changed by then.

I was going to write that Zsa Zsa Gabor made the same mistake with husbands but when I looked it up I found that she and Husband 9 - Frederick Prinz von Anhalt - were together for 30 years until she died. Damn research, spoiling what could have been a great analogy.

At the Pudding Club, we were given a score sheet so that we could record our puddings one by one and rate them.

I will show you photographs of the puddings. Trigger warning: if you have a gluten sensitivity, then just by reading this post you could put your health at risk.

Pudding 1. Spotted Dick. 8/10. My friends thought I was brave to begin with this. They meant foolhardy. It's basically lard with raisins and was used in medieval times to shoot from cannons and rout the enemy.

Pudding 2. Apple crumble. 8/10. If you're shocked that I even ate a second pudding, I must say that these pictures are close-ups. Each portion was about half a normal* one.

*we could debate the definition of normal, however. 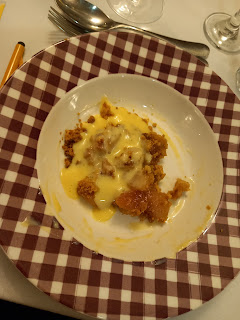 Pudding 3. Marmalade bread and butter pudding. 9/10. This got my top mark. It's bread, butter, marmalade, eggs and milk, in essence, which makes it most suitable as a breakfast food. 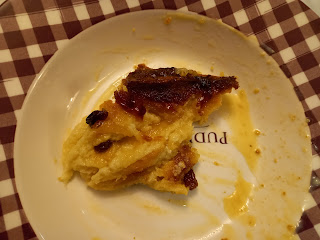 Pudding 4. Duchess Pudding. 8/10. This was a sponge involving dates and nuts, developed for the Platinum Jubilee, we were told. I had eaten too muchess by the time I got to the duchess and was beginning to wonder whether I would still fit in the car on the way home. 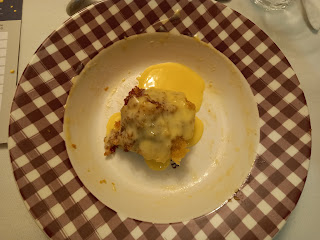 Pudding 5. Sticky toffee pudding. 7/10. The pudding was delicious but the accompanying toffee sauce was so sweet, it hit a place under my earlobes, made my eyes water, and caused the nail varnish on my toenails to begin flaking off. 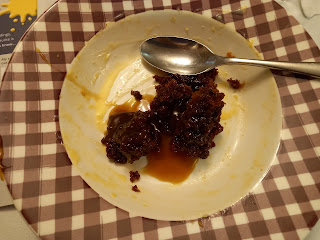 Pudding 6. Lemon sponge. 7/10. By this time, we were all groaning, and keeping a beady eye on the man who drank the Guinness, in case he exploded near any of us and we needed to dive under the tables. 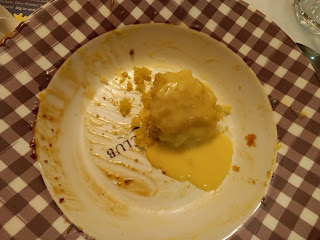 Pudding 7. Chocolate and raspberry mousse. 8/10. I had two spoonsful of this, even though it was tasty. It was a wise decision, although using the word wise about anything I was doing at this point seems facile, considering I was filling my bloodstream with so much sugar that I was more or less marzipan by then. 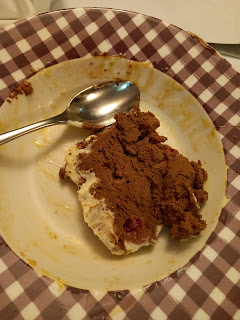 At the end, all the scores were counted up and the winner announced. I can't remember which one won although this may be because my brain was taking little in by this point, its cells having been nudged aside in favour of desserts.

In the car on the way home, I and my friends suspected that none of us would have a good night's sleep. But I slept like death, probably because I'd come so very near it.

Still, as I said at the start, I regret nothing, and would go so far as to recommend it to any of you. Go here for details and three trillion calories.

Birthday Me me and food Me out and about