Reasons why I am going quiet for a week. STOP CELEBRATING, YOU MEANO.

August 05, 2011
Tomorrow I'm travelling oop North to the Lake District - more specifically, Grasmere - and I'm staying for a week.  For those of you not British, the Lake District is a district of England.  With lakes.  Here's a bit of it.

Why are you going there, I hear those of you ask who know VERY WELL what a pagan I am when it comes to Nature, Nice Scenery and Putting One Foot in Front of the Other.

(Or should I say 'ex' home, as Willie-boy is of course very dead and therefore busy DEcomposing.)

The first thing I am going to do when we get there tomorrow is to find out what the opening hours of the gingerbread shop Dove Cottage are so that I can be there waiting, drooling with saliva literary zeal and poetic anticipation.

The Husband and I are travelling up by train tomorrow.  But I have started reading a book tonight which I think is going to make me Very Poor Company as a Fellow Passenger.  It's called 'The Slap'.  I bought it because I thought it was a book for Ladies of a Certain Age about cosmetics.  As you know, I've had some struggles in this area recently.  But it turns out it's a great story about a guy who slaps a friend's little boy at a barbecue causing RAMIFICATIONS.  The book started off with some very naughty words which were a bit of a shock on the first page, but I have settled in to it very nicely and I think it's going to be a 'sorry-dear-I-AM-listening-REALLY-I-am' kind of book.  Has anyone else read it? 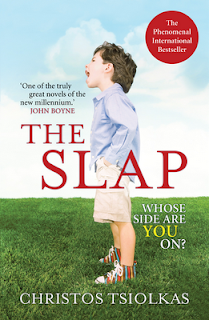 Everyone says it's a book which 'divides' people, and I am hoping this is a metaphorical expression and doesn't mean that I am going to get up from my seat on the train and find that half of me falls to the right and half of me falls to the left.  This would presumably up the stakes in terms of providing excitement for my husband's journey, but perhaps not the kind of excitement he's looking for, and certainly not BEFORE the holiday we've paid through the nose for.

I was reading the book in the garden while trying to brown the tops of my arms.  A while ago, my arms got very brown from the middle of my upper arms downwards because I was at a school sports day wearing a short sleeved T-shirt and forgot my sun cream.  It has been SO embarrassing, going around looking I'd randomly dipped my arms in gravy up to a certain point, above which they are as pasty as a nun's torso.

So today while reading the book I lathered all the already-tanned-thanks bits of my arms with suncream and then sat in the sun for two hours with my sleeves rolled up trying to even things out a bit.  It has been partly successful.  I'm still two-tone, but, hey, I'm going oop North where nobody knows me and anyway according to the weather forecast I'll be wearing my fleece, a scarf and a plastic mac.

I'll let you know what I think of 'The Slap'.  Great name for a book and it's got a fabulous cover as you can see above.  I'm pleased about this, because at least the Husband has got something interesting to look at while I ignore him for three hours on the train.

See you in a week or so, peoples.  I am being taken to a sheepdog trials as part of the holiday - a veiled attempt by the Husband to teach me how to behave, I suspect.
Me at home Me travelling