Reasons to prepare yourself before engaging young children in conversation

September 05, 2018
'How many years after the Great Fire of London were you born, Grandpa?' our 6 year old grandson asked my husband on Monday when we went round to their house for Grandpa's birthday meal.

The Great Fire of London is one of Elijah's 'markers'. He learned about it at school and knows the date: 1666. So, why not use it to try and get his head around time? Logical.

'When were you a baby, Grandma?' 4 year old Phoebe then asked me at the dinner table, looking up at my face as if to say, 'Was this ever possible?'

It reminded me of when I tried to tell a little girl in a shop who was buying a Mars Bar that, when I'd been a child, Mars Bars had been four pence. She stared at me as one might gaze at the Acropolis and said, 'Were Mars Bars even invented then?'

I love this stage, though, when they're not quite sure about time and how it works. It leads to the most entertaining questions.

I've already told you in this blog post about when Elijah wanted me to find real footage on Youtube of medieval knights fighting at Warwick Castle. He was most disappointed to find that no one was around at the time filming them on a smartphone.

It must be a strange world inside a child's head until they learn to navigate days, weeks, months, years, decades, centuries.

It can feel mean, giving them the bald truth sometimes. 'How many sleeps until Christmas, Grandma?'

'A hundred and thirteen.'

'A HUNDRED AND THIRTEEN?' *wobbly lip*

One may as well have set fire to a sparkly pile of Christmas presents or put a Marmite sandwich in front of the child for Christmas dinner.


The difficulty with time - and with age - continues into later childhood. I have a very clear memory of sitting on the edge of my bed in 1976, at the age of 14, working out how old I would be at the millennium. I totted it up and realised I'd be 38. I couldn't process it. Thirty-eight sounded like someone teetering on the edge of the grave. I dismissed the idea. It couldn't happen.

Also, I was recently surprised to discover that a teacher who had taught me English at school - Mr Jackson - was still alive. How did I find out? Did I meet him? No. I met a man at a literary event who had been Mr Jackson's teacher when Mr Jackson was Junior Jackson and at school himself! It was on the tip of my tongue to say to this man, 'You look incredible for someone who must be two hundred and six! Can I have your plastic surgeon's number?'

Poor Mr Jackson. I'd thought of him, and all my teachers, as octogenarians at least, surprised to see them turn up day after day instead of being admitted to nursing homes or dropping dead at the school gate. But in the mid 1970s, he was probably only in his 30s. Now, he's in his 70s, and the man I met, who taught him, was a sprightly chap in his 90s.

These days, I'm on the other side of the desk: a teacher. And when I said to a student yesterday who'd come across an unfamiliar word, 'Why don't you go and look up the definition in a dictionary?' he looked at me pityingly, although kindly, and said, 'I think that's just an old person thing now.'

This was on the first day of term as teaching began again after my six week summer holiday.

Hm .... How long have I got until the next summer holiday? 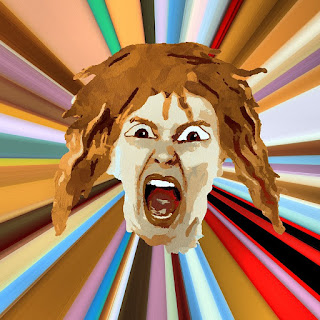